The award, the country's highest civilian honour for women, will be presented by President Ram Nath Kovind on International Women''s day on March 8 at a function in Rashtrapathi Bhavan. 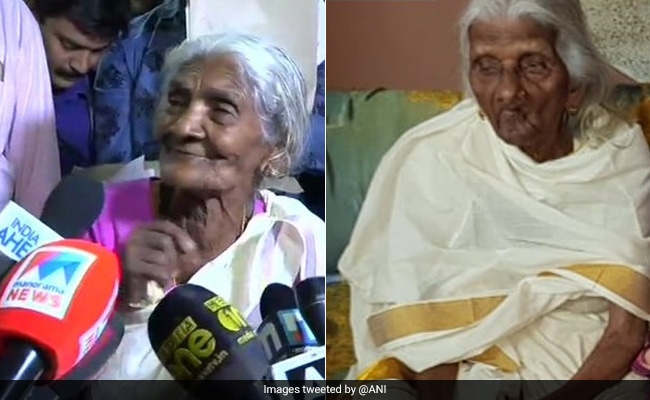 The President will present the award to 96-yr-old Karthiyani Amma and 105-yr-old Bhageerathi Amma.

Centenarian Bhageerathi Amma and 96-year-old Karthiyayini Amma in Kerala have been jointly selected for the prestigious Nari Shakti Puraskar for 2019 by the Central government for their exceptional contribution towards women's empowerment.

The award, the country's highest civilian honour for women, will be presented by President Ram Nath Kovind on International Women''s day on March 8 at a function in Rashtrapathi Bhavan.

Proving that age is no bar in the quest for knowledge, the two had came out with flying colours in examinations conducted Kerala Literacy Mission.

Prime Minister Narendra Modi had mentioned about the achievements of the two women in his monthly "Mann ki Baat" programme recently.

Bhageerathi amma had last year cleared the fourth standard equivalency examination, making her the oldest student in the country to emerge succcessful in the test conducted by the state literacy mission at Kollam.

Karthiyani Amma from Alapuzha had secured 98 marks out of 100 in "AkshraLaksham", a flagship programme of the state-run Kerala State Literacy Mission Authority, in October 2018.

She became a role model for thousands of people who wish to be part of the literacy programmes.

The two women have received a letter from the Centre informing them about their selection for the award.

Bhageerathi amma, a great grandmother, had always yearned to study and gain knowledge.

But had to give up her dream after her mother died as she had to take care of her younger siblings.

She became a widow in her 30s and had to shoulder the responsibility of bringing up her six children.

According to the 2011 census, there were around 18.5lakh illiterates in the state.

To wipe out illiteracy completely, the mission has chalked out several programmes, especially among marginalised groups like tribals, fisherfolk and slum dwellers.

Kerala Literacy Mission sources said due to her advanced age Bhageerathi amma had some health issues and was not likely to travel to Delhi.

She has sought permission to depute a person to accept the award on her behalf.

Karthiyani Amma is leaving for Delhi on Friday, they said.