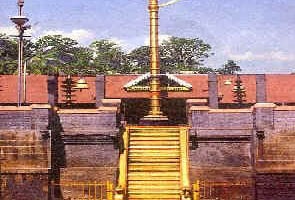 Sabarimala: The hill shrine of Lord Ayyappa was opened on Friday evening for the 21-day-long 'Makaravilakku' season.

Melsanthi N Balamurali opened the sanctum sanctorum of the temple at 5.30 p m in the presence of Thanthri Kandararu Maheswararu.

As a practice, no ritual was conducted in the temple.

The annual petta thullal at the Erumeli Sree Dharma Sastha Temple would be held on January 12.

The petta thullal ritual by the Ambalapuzha team led by Chandrashekharan Nair would be taken out from Erumeli Kochambalam to Erumeli Sree Dharma Sastha Temple at 12 noon after seeing the 'krishnaparunthu' in the sky.

The petta thullal by the Alangattu team led by Vijayakumar Menon would be taken out from the Kochambalam to Erumeli Sree Dharma Sastha Temple at 2 p m soon after seeing the star in the sky.

The procession carrying the 'Thiruvabharanam', the attire in gold to be adorned on the idol of Lord Ayyappa on the Makaravilakku day on January 15, would be taken out from Pandalam Valiyakoickal Sree Dharma Sastha Temple at 1 pm on January 13.

The ceremonial procession carrying the 'thidambu' of Malikappuram Devi on a caparisoned elephant would be held from January 15 to 19.

The annual Guruthi ritual for the Hill Gods of Lord Ayyappa would be held at Malikappuram at 11 p m on January 20.

Promoted
Listen to the latest songs, only on JioSaavn.com
Temple to be closed on January 21

The Lord Ayyappa Temple would be closed at 7 a m on January 21, after the darsan of the representative of Panadalam Raja.