Lini Puthussery, 31, died due to Nipah virus infection. She was in the team that treated the first victim of the Nipah virus in Kerala's Kozhikode

Nipah virus: Kerala nurse Lini Puthussery left an emotional note to her husband before she died

Thiruvananthapuram: "I am almost on my way, take care of our children..." a young nurse in Kerala scribbled in a note for her husband, in a hospital isolation unit for victims of the deadly new Nipah virus. Lini Puthussery, 31, couldn't see her family one last time. She was cremated quickly on Monday so the infection wouldn't spread.

Lini had two little children, aged seven and two. She was in the team that treated the first victim of the virus at Perambara hospital in Kozhikode.

"Saji Chetta, I am almost on my way. I don't think I will be able to see you. Sorry. Take care of our children properly. Our innocent child, take him to the gulf. They shouldn't be alone like our father. Lots of love..." she wrote in the note that has been widely shared on social media and has moved many to tears.

"Nurse Lini died in our battle against the Nipah virus. She died trying to save patients infected by it. She was just 31 and was a mother of two little kids. If she is not a martyr, I don't know who is," tweeted Dr Deepu Sebin, chief executive of DailyRounds, a network of doctors.

A nurse who took care of a #NIPHAVirus patients & succumbed to same. Her body was cremated with extreme urgency to prevent any possible spread and even her family could not pay due respect. Respect to Lini &a reminder that healthcare workers take immense personal risk to serve us pic.twitter.com/4kzESu6j4J

The Perambara hospital has confirmed the nurse was cremated soon after her death, with her family's consent, and no one could meet her. "We can confirm that five people have died from the Nipah virus," Kerala state health surveillance officer KJ Reena told news agency AFP.

The three who died earlier were all from the same family -- two brothers in their early twenties and a woman relative who had been with them at the hospital. The father of the brothers is reportedly being treated for the virus. Dead bats were found in a well of the family's home.

About a dozen more people have died after high fever and other symptoms of the virus in Kozhikode and neighbouring Malappuram. Unconfirmed reports suggest two more nurses are admitted to the Kozhikode Medical College hospital with high fever. 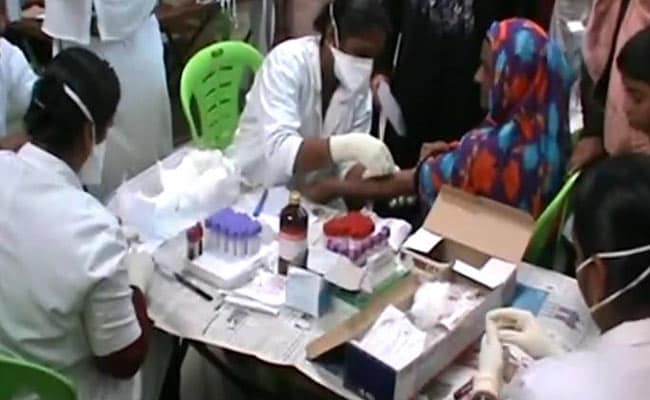 The Nipah virus or NiV infection, spread mainly by fruit bats, has symptoms like breathing trouble, brain swelling, fever, headache, drowsiness, disorientation and delirium. A patient can fall into coma within 48 hours. It travels through direct contact with a patient.

There is no vaccine for the virus yet, says the World Health Organisation. The main treatment for those infected is "intensive supportive care", according to the UN health body.

Promoted
Listen to the latest songs, only on JioSaavn.com
Kerala is on high alert over the infection and two control rooms have been opened in Kozhikode. A central team has also been sent to the district to help the state administration.

There is no vaccination for Nipah which has killed more than 260 people in Malaysia, Bangladesh and India in outbreaks since 1998.