Lakhs of bricks are abandoned by devotees after the annual "Attukal Pongala", one of the world's largest all-women religious event, each year. 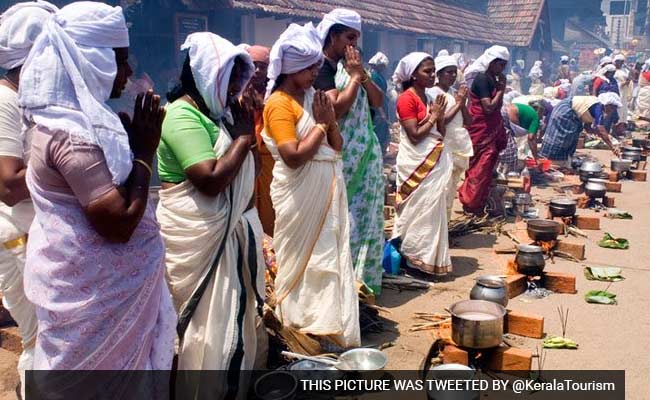 "Attukal Pongala" is one of the world's largest all-women religious event.

Thiruvananthapuram: 'Pongala' offerings made at the Attukal Devi temple in Thiruvananthapuram in makeshift brick stoves are turning out to be a blessing for the homeless as the bricks will be used for construction of houses for the needy.

Lakhs of bricks are abandoned by devotees after the annual "Attukal Pongala", one of the world's largest all-women religious event, each year.

Women from various parts of the state and outside prepare 'pongala' (a mix of rice, jaggery and coconut) in fresh earthen or metal pots as an offering to Attukal Devi, the presiding deity of the temple, in makeshift brick stoves.

The ritual is performed by lining up on either side of the roads in the city and its suburbs. The line is sometimes seven km long.

The city corporation has come out with an initiative to collect and reuse the bricks left over by devotees, to construct budget houses for poor.

The devotes abandon several lakh of bricks after 'pongala' every year across the city and it would be used for the construction purpose from the next year under the state government's ambitious LIFE programme, according to the Corporation.

Thiruvananthapuram mayor V K Prasanth said the project would not only help poor to realise their life-long dream of building a house of their own but also keep the city clean after the mass religious fest.

"The city is full of waste and bricks after every pongala fest. Corporation staff used to launch a massive cleaning drive soon after the ritual is over," Mr Prasanth told PTI.

"But, usually, our men will remove waste other than bricks. From next year onwards, they will procure bricks from every nook and cranny of the city after pongala," he said.

In all these years, bricks, abandoned by devotees, would be either taken away by local people or brick vendors who would collect and resell it.

Detailing the Corporation's housing plan, the Mayor said each beneficiary would be identified from 100 Corporation wards here and the procured bricks would be distributed among them.

"At least 4,000-5,000 bricks are needed for the construction of each budget house we envisage," he said.

Besides bricks, an amount of Rs 3.50 lakh would also be given to each beneficiary as financial aid to build houses under the LIFE programme, he said.

According to official figures, 4.70 lakh families remain homeless in the entire state.

'Pongala', which used to be observed in February-March months every year, has been entered as "the largest gathering of women" in the Guinness Book of World records based on the 2.5 million turnout in 2009.
Comments
Attukal PongalaAttukal Devi templeProject LIFE