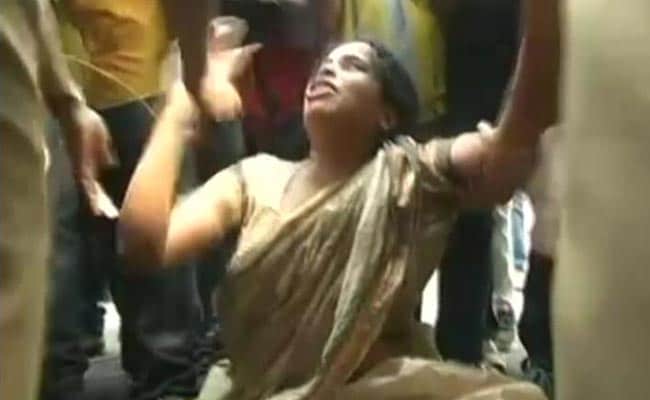 Jishnu Prannoy's mother demand arrest of those responsible for her son's death who committed suicide.

Thiruvananthapuram: A mother fighting to seek justice for the death of her son, called off her fast on the fifth day on Sunday night after CPI-M General Secretary Sitaram Yechury and Kerala Chief Minister Pinarayi Vijayan assured her of action. Mahija, currently admitted at the Medical College hospital in Thiruvananthpuram after she was roughed up by police on Wednesday while she and her relatives was going to meet the state police chief to demand justice, was on a fast there along with a close relative.

They were demanding arrest of the remaining accused who was responsible for the death of her son Jishnu Prannoy and action against the police officials who roughed them up.

It was after a two hour discussion on Sunday evening led by State Attorney KG Sohan and Special Public Prosecutor CP Udayabhanu with her relative Sreejith and others that the fast was called off.

"The state government has given us a written agreement that all the demands that we raised have been met. We fully trust the two state government representatives who will ensure that the agreements will be met," said Mr Sreejith who announced that Mahija is ending her fast and so is her daughter Avinsha who is also fasting at their home near Kozhikode.

Mr Sohan told the media in front of the hospital that Mr Vijayan called up Mahija and assured her that her demands will be met.

The agreement was made easy, after news came that the third accused in the case of her son - college Vice-Principal N Shakthivel who was on the run for the past three months - has been arrested by police from Coimbatore.

Earlier in the day, Communist Party of India-Marxist chief Mr Yechury also spoke to Mahija for 10 minutes and assured her that the state government will do all what is necessary.

All these days, Mr Vijayan had stood his ground and even refused to meet or speak to Mahija and all along defended the action of police and gave them a clean chit.

And to top it all, the government released an advertisement titled "Jishnu Case - The truth behind it" in Saturday's newspapers detailing the sequence of events on the action taken in the alleged suicide of the student. It was immediately slammed by the student's family.

With the agreement, the state government appears to have retracted from it.

Mr Prannoy was found hanging in January on the campus of the Nehru College of Engineering and Research, in Thrissur.

Promoted
Listen to the latest songs, only on JioSaavn.com
Initially, the death was dismissed as a case of suicide, but after his mother protested, police have taken up the case again as she has been firm on her belief that her son was "killed" by the college authorities.

By now the college chairman and another official of the college was arrested but since they managed to get anticipatory bail, police had to release them and will have to arrest two more officials in the case.