Congress and Youth Congress activists took out marches to Collectorates and district headquarters across the state. 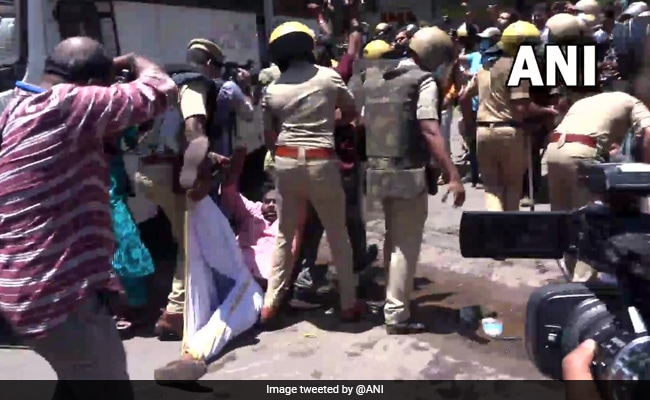 Tension prevailed for some time in Kollam district after clashes between police and protesters.

Kerala continued to witness protest marches and clashes with police by the opposition party activists on Friday, the third consecutive day, demanding the resignation of Chief Minister Pinarayi Vijayan in view of fresh revelations against him and his family by gold smuggling case accused Swapna Suresh.

Congress and Youth Congress activists took out marches to Collectorates and district headquarters across the state raising slogans against the Chief Minister and the LDF government.

Police lathicharged the protesting activists and used water cannons to disperse them in various districts including Thiruvananthapuram, Kozhikode, Malappuram, Kannur and so on.

Tension prevailed for some time in Kollam district after a clash broke out between police and the protesters.

Two police personnel were reportedly injured during the minor clash while several Congress activists suffered injury in the lathicharge. In Kottayam, protesters allegedly pelted stones at the policemen.

KPCC chief K Sudhakaran inaugurated the state-level protest in front of the Secretariat, the administrative hub here, while Leader of Opposition in the state Assembly VD Satheesan led the protest in Ernakulam.

Meanwhile, a notice served by the police to the KPCC chief warning stern legal action if any untoward incidents during the protest march in the politically volatile Kannur district triggered a controversy.

Triggering a political storm in the state, Ms Suresh, earlier this week. claimed that she disclosed before the court - in her statement under Section 164 of Criminal Procedure Code - the other people allegedly involved in the smuggling cases and their "degrees of involvement."

She said she had given statements against the CM, his family, KT Jaleel and some other top bureaucrats.

After her revelations before the media, subsequent to recording her Section 164 statement, CM Vijayan had issued a statement dismissing Ms Suresh's claims and allegations as "baseless".

Police on Wednesday had lodged the case under Sections 153 (giving provocation with intent to cause a riot) and 120B (criminal conspiracy) of the Indian Penal Code against Ms Suresh on the basis of Mr Jaleel's complaint.

The High Court on Thursday dismissed an anticipatory bail plea jointly moved by Ms Suresh and co-accused in the gold smuggling scam Sarith PS, saying the offences (conspiracy, among others) she has been booked for in the FIR were bailable and that the latter was not even an accused in the case.

Ms Suresh, a former employee of the UAE Consulate here, was taken into custody by the National Investigation Agency (NIA) along with another accused Sandeep Nair from Bengaluru on July 11, 2020.

The NIA, Enforcement Directorate (ED) and Customs conducted separate probes into the racket that was busted with the seizure of gold worth Rs 15 crore from the diplomatic baggage of the UAE Consulate at Thiruvananthapuram airport on July 5, 2020.

Several people, including M Sivasankar, the former Principal Secretary to the Chief Minister and another ex-employee of the UAE Consulate here, Sarith, were arrested in connection with the case.