In Kerala, Irish Man In Frantic Search For Wife Missing For 9 Days 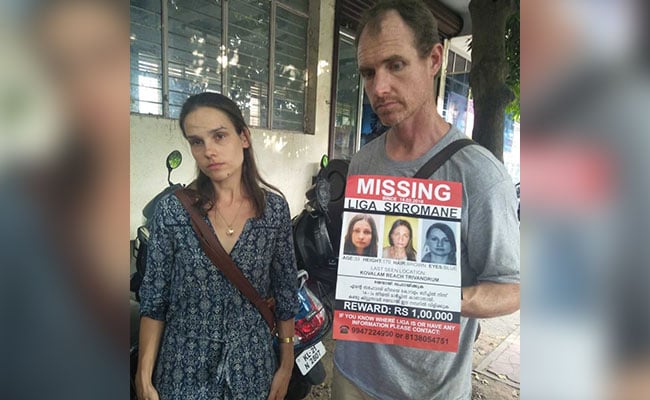 Thiruvananthapuram: 42-year-old Andrew Jordan has been frantically searching for his wife Liga Skromane, 33, who went missing in Kerala's Kovalam last week. "We reached out to the police and were assured that they will get her in two days. It's been nine days now," said Andrew, who had arrived in Kerala last Saturday.

Liga, who has Lativan passport, had arrived in Thiruvananthapuram on February 21 for Ayurvedic treatment of post-traumatic depression. On March 14, she went to a beach in Kovalam, about 40 km from the state capital, without informing her sister Ilze Skromane, who had come to India with her. There has been no trace of Liga since then.

"I was told yesterday by the police that my wife was last spotted by locals on 18th. I checked with locals and they could even identify her by her clothes. The description matched. We need help to locate her," said Andrew.

"She is well-travelled and an intelligent woman. She knows what needs to be done if she has lost direction," he stressed.

The family members have announced a reward of Rs. one lakh for anyone who gives information about Liga. They have also printed notices with contact numbers.

Andrew suspects that his wife has been kidnapped. "The police, I think, initially kept thinking that she will return by herself and that she must have gone away for a while. We suspect something else. We believe she must have been taken away by a group that is not letting her off.  We need help in locating her. We came to Kerala for her to be cured, because doctors in our country couldn't find any answers to her illness," Liga's sister, Ms Ilze Skromane told NDTV.

"We just need to find her," she added.

Ms Ilze has been using social media for spreading the word. She also tweeted External Affairs Minister Sushma Swaraj on Thursday for help.

@SushmaSwaraj Please Help! My Sister, citizen of Latvia has been missing 8 days! We are heart broken and very worried!

According to police sources, a body of a foreign national has been recovered but a DNA test will be required to confirm the identity. Liga's sister, however, refuted the suspicion saying, "My sister never had a tattoo, this body has a tattoo in the arm. Also, my sister's and my feet size are almost the same, but the feet of the body which has been recovered are much larger. We need all possible help to find Liga."
Comments
Andrew JordanKovalamLiga Skromane