"Can't Commit Crime And Get Away": Kerala Cops Catch Rape Accused In Saudi

Sunil Kumar, who lived and worked as a tile layer in Saudi Arabia, allegedly raped the girl, whose uncle he had befriended, while in Kerala on a holiday in 2017

A Kerala man who fled to Saudi Arabia two years ago after allegedly raping a 13-year-old girl was brought back to India on Tuesday by a team of officers led by Merin Joseph, 29, the state's youngest ever district police chief. Sunil Kumar, 39, had been booked in 2017 under the Protection of Children from Sexual Offences Act (POCSO).

"Our state police chief has been paying a lot of attention to aspects (of) investigation where coordination is required with Interpol. With respect to such cases, there are hardly any precedents and, going by the principle of leading from the front, I decided to take it on myself," Merin Joseph told NDTV.

Sunil Kumar, who worked as a tile layer in Saudi Arabia, had allegedly raped the girl, whose uncle he had befriended, while in Kerala on a holiday. The incident came to light after the girl, who later committed suicide, told her classmates of the rape.

According to Kerala police officials, Sunil Kumar was arrested in Riyadh six months ago by Interpol agents based on a 2017 Red Corner notice. A chargesheet in the matter has yet to be filed.

"Our focus was on getting the accused back. Kerala police has sent out a strong message to people that you cannot commit a crime and get away by going abroad," Ms Joseph said, adding that Sunil Kumar was the first Kerala native to extradited under the India-Saudi Arabia treaty. 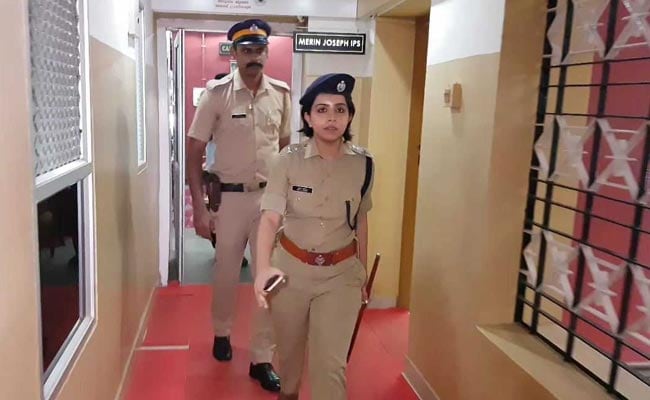 "I was wearing 'abaya (robe-like dress)' and 'purdah (head-covering)' while in Saudi Arabia. I did not have a problem in this because I was visiting a foreign country and had to follow their rules," she added.

Earlier this month Harishchandra Naik, Deputy Superintendent of Police (Kasargod), led a team to bring back another rape accused, this time from Abu Dhabi in the UAE. The accused has also been charged under POCSO.

"In the last year we have been able to get five accused fugitives back to India; two are accused in POCSO cases," S Sreejith, Inspector General, Crime Branch, told NDTV.

"Earlier, while dealing with rape-related cases where fugitives are absconding, on average it would take from six months to three years to even get evidence on record. Now, with several Mutual Legal Assessment Treaties, what has happened is that there is an informal liaison pursued rigorously by the concerned police force, it yields remarkable results. Kerala is on a very strong footing," he continued.

A 2018 study conducted by the Inspector General shed some light on major challenges facing POCSO cases. Some of these challenges include dealing with  survivors' hostile support systems, delays in investigating officers receiving confidential survivor statements from magistrates and seeing a percentage of cases filed falsely due to family disputes or cases of vengeance.

According to the National Crime Record Bureau, in 2016 Kerala had an 18 per cent conviction rate for POCSO cases; the national average was 30 per cent. It is worth noting, though, that more than 94 per cent of cases across the country are still pending in court.

In the last 12 months Interpol has published more than 20 Red Corner notices for fugitives wanted by Kerala Police. Three of these are POCSO and rape-related.