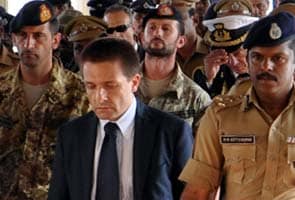 New Delhi: The Italian ship involved in the shooting of two Indian fishermen cannot leave India till it provides a bank guarantee of 25 lakhs with a Kerala court.

The family of one of the two fishermen shot dead by Italian marines off the coast of Kochi has asked for one crore as compensation in the Kerala High Court. The fisherman, Jelestine, was killed last week along with his friend, Pinku. The Italian navy men reportedly mistook them for Somalian pirates.

In response to the petition filed by Jelestine's family, the Kerala High Court has said that the Italian ship involved cannot leave India till a bank guarantee of 25 lakhs is provided in court. However, this is an interim order - both parties will now file counter-affidavits.

The Enrica Lexie was sailing Singapore from Egypt when two of the six armed guards on board the merchant vessel shot the fishermen. (India vs Italy over fishermen deaths: 10 developments)

The deaths have led to huge anger in the large fishing community of Kochi. It's also turned into an international confrontation, with Italy describing India's decision to arrest the marines as "unilateral" and "coercive." A talk between senior officials today did not pave the way for a compromise. Preneet Kaur, India's junior minister for Foreign Affairs met Italian Deputy Foreign Minister Staffan De Mistura this morning. "Two innocent lives have been taken," she said. "The law will take its own course."

Mr De Mistura said the incident took place in international waters "and investigation will ascertain the exact position" of the Italian ship.  "We are taking it seriously. We are definitely expressing terrible sadness and regret over the loss of lives," he said.

Promoted
Listen to the latest songs, only on JioSaavn.com
Italian officials have stressed that their laws require armed guards to be on board their ships, ; they say  the marines should be tried at home according to international laws.  But India says that the incident took place within its waters, and that the fishermen were shot at without any provocation. A case of murder has been registered against the two Italians.