Elephant Falls Into 15 Feet Deep Well In Kerala, Trench Dug To Rescue It

The incident happened in Pooyamkutty, near a reserve forest area in Kerala

Visuals showed the elephant making considerable effort for the initial climb out.

A wild elephant which strayed into a village in Kerala's Ernakulam district and fell into an open well was rescued by the forest officials this morning. The elephant was stuck for almost four hours before a trench-like passage was dug to get it out of the well.

Visuals showed the elephant making considerable effort for the initial climb out as the locals clapped and cheered it on.

The incident happened in Pooyamkutty, near a reserve forest area. "The well was about 15 -20 feet deep. We used a JCB to dig something like a trench, so the elephant could move out. The elephant returned to the forest and is being monitored by a team," said Ravi Kumar, officer in-charge of the concerned Divisional Forest Office told NDTV.

"The well was barely 10-20 meters away from the road. The elephant once out, crossed the river and entered the forest," he added. 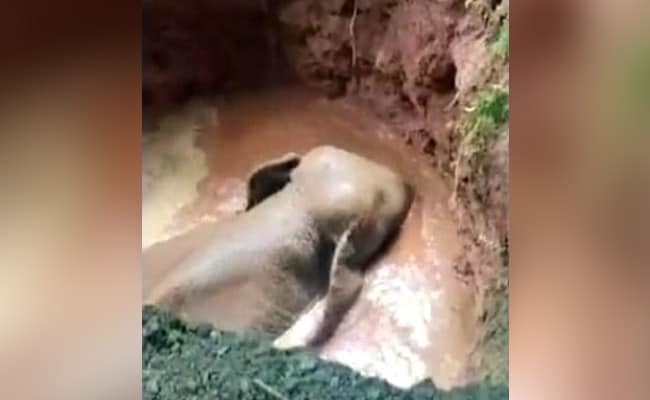 The water level in the well was not very high, according to the officials. It was less than the height of the elephant, as seen in the visuals.

As the elephant was returning to the forest, a few two-wheelers were parked on the side of a narrow road. One of them, which was on the tusker's path, was seen damaged as it made its way to the forest.

Locals also raised concerns, marking their protest about increasing instances of wild animals, such as wild boars and others, entering human settlements and destroying their produce. "We have assured them that we will look into a feasibility study on what measures could be taken for their local terrain to reduce man-animal conflict", Mr Kumar added.