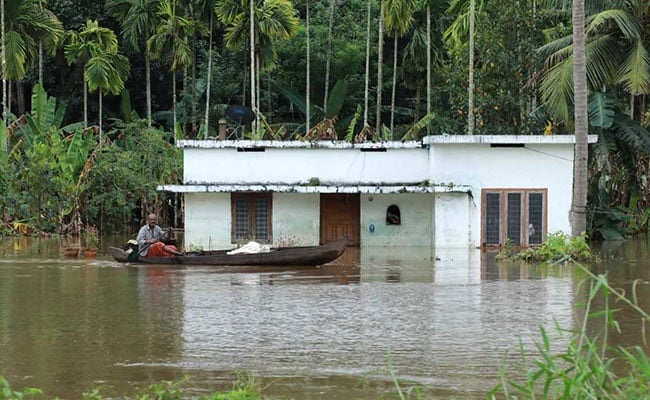 A day after Home Minister Rajnath Singh announced Rs 100 crore for rain-ravaged Kerala and the state finance minister crunched the numbers and underlined the huge mismatch between loss and relief, union minister KJ Alphons asked, "what is he talking about?"

Kerala minister Thomas Isaac said that the total loss due to floods is estimated to be around Rs 8,000 crore. "Immediate mitigation and rectification expenditure to the state around Rs 3,000. And the central grant precious Rs 100. And that too if it is from regular disaster management fund due to Kerala , I don't know!" he tweeted.

He also alleged that the Kerala finance minister hasn't even visited the worst-affected areas in the state.

"During the UPA rule, the ministers from Kerala never visited the state in the event of a disaster unlike under the current regime. The home minister, Kiren Rijiju and I went to flooded areas. Isaac never visited his constituency Alleppey during the floods. What is he talking about?" Mr Alphons was quoted as saying by news agency Press Trust of India.

Heavy rainfall over the last five days has been the worst since the unforgettable flood of 1924 which lasted about three weeks and caused huge damage to life and property.

A little less than a century later, 186 people died in rain-related incidents, including 39 since August 8. The weathermen say heavy rain will continue till August 15 in many parts of Kerala.

The preliminary estimates show the loss to be around Rs 8,316 crore, according to the Chief Minister's Office. The Kerala government had requested the centre to declare the calamity as "rare severity" and asked for an assistance of Rs 1,220 crore to tide over the crisis.

"I understand the suffering of the people of Kerala from the present crisis. Since assessment of the damage will take time, I hereby announce immediate relief as advance of Rs 100 crore," the home minister had said on Sunday.

Mr Singh also approved the release of the second installment of Rs 80.25 crore in advance for the State Disaster Response Force (SDRF).

Mr Alphons dismissed talks of "discrimination" against any state and said he has asked for a special package for Kerala. "There are clear guidelines for relief for disaster-hit states and the government has followed norms in Kerala's case," the minister, who is from Kottayam, said.

Kerala Chief Minister Pinarayi Vijayan has said that rebuilding the lives of the affected is going to be an arduous task. "We will have to build houses, roads and bridges. At this of point of time, nothing can help as much as money," the chief minister's office tweeted.

At least ten districts in Kerala have been severely affected. Shutters to 27 dams had to be opened across the state after water levels rose to maximum capacity.

The roads have suffered the worst damage, a government official told NDTV. "National Highways, state highways, all are damaged. We are trying to get a special package for the roads," said Idukki District Collector Jeevan Babu.

Overall, 320 relief camps have been set up across the six affected districts  -- Thrissur, Ernakulam, Alappuzha, Wayand, Kozhikode and Idukki. According to the latest official figures, more than 60,000 people, including women, toddlers and senior citizens, have been lodged in relief camps.

The tourism industry and the plantation sector will take a long time to recuperate from the loss caused by floods that hit the state soon after the Nipah outbreak.

The picturesque districts of Idukki and Wayanad are among the worst hit. The loss suffered by tea, coffee, cardamom and rubber planters since the onset of monsoon on May 29 has been pegged at Rs 600 crore, secretary of Association of Planters of Kerala Ajit BK said.