After he was sent to prison yesterday, Dileep was sacked by the Association of Malayalam Movies Artistes, after top actors met at mega star Mammootty's Kochi home. 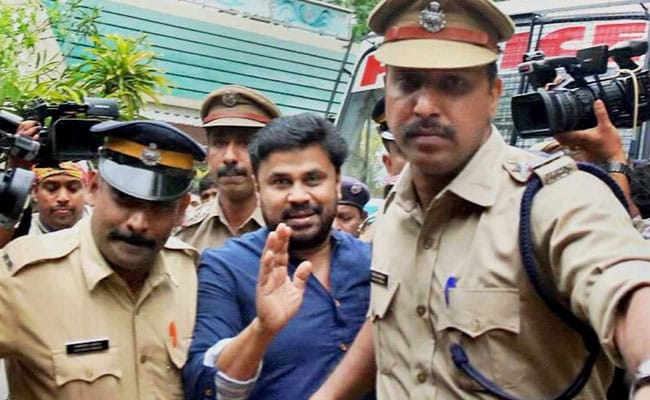 Malayalam actor Dileep, 48, was brought to court today in a police van amid tight security.

Thiruvananthapuram: Malayalam superstar Dileep was booed today as he was brought to court in a police van from the jail he is lodged in Aluva, his hometown, about 25 kilometers from Kochi. A convoy of police vehicles escorted the van amid reports that angry crowds could cause trouble.

The court said it would hear the actor's bail request only two days later, allowing the police custody of the actor till then to question him. The police had sought custody for three days, the court gave them two.

Dileep, 48, was arrested on Monday night after hours of questioning and was sent to 14 days in prison yesterday in the abduction and sexual assault of an actress in February this year.

Police sources said they are investigating the allegation that Dileep offered a man 1.5 crore rupees in 2013 to attack the actress and wanted the assault recorded on video and nude photographs clicked. The actor wanted revenge, the police have alleged in a report to court, because he held the actress responsible for his first marriage to actress Manju Warrier falling apart.

As he sought bail today, the actor's lawyer told the court today that Dileep has been trapped in a conspiracy scripted by "a very fertile imagination."

"Dileep has acted in many movies, but this is the best script and highly imaginative," the lawyer K Ramkumar said, calling it "an indiscriminate arrest without any evidence in the remand report to prove his crime at all."

Dileep, who has been charged with criminal conspiracy, rape, kidnapping and wrongful confinement, has denied any role in the attack on the actress, who was confined in a moving car for two hours by at least four men who molested her and took photographs in February this year.

Six people were arrested earlier this year, including the main accused Pulsar Suni, a driver she had sacked and the man the police allege Dileep contracted to attack her.

While the actor has said he does not know Pulsar Suni, the police allege that their investigations show Suni was on location when Dileep's film Thrissur was shot in November last year. A photo of Suni at the film's shoot was released by TV channels.

The actor's lawyer challenged this argument in the court saying, "Dileep is a superstar and many come to meet him during his film shoots. He doesn't know everyone."

Promoted
Listen to the latest songs, only on JioSaavn.com
In the next two days the police are expected to take the actor to the places where the conspiracy to attack the actress was allegedly hatched. The police could also summon others from the film industry for questioning.

After he was sent to prison yesterday, Dileep was sacked by the Association of Malayalam Movies Artistes, after top actors met at mega star Mammootty's Kochi home.