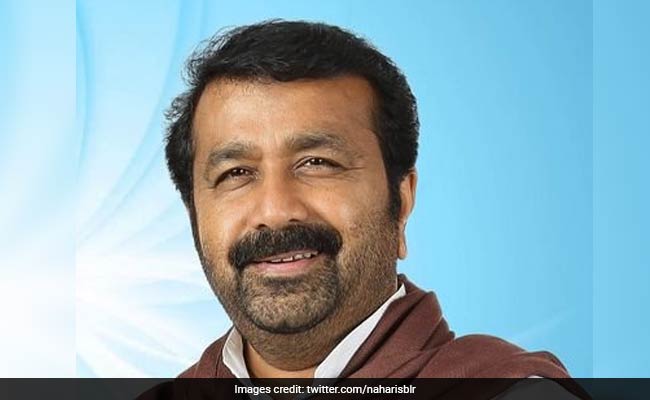 Bengaluru: When the first list of candidates the Congress plans to field in the upcoming Assembly elections in Karnataka was released last week, there were 218 names on it. Of the remaining seats in the 224-member Vidhan Soudha Assembly, there was much suspense around the Shanthinagar constituency in Central Bengaluru. However, lawmaker NA Haris, who represents the seat, has finally found himself on the second and final list.

Mr Haris' candidature was in doubt for the May 12 elections as the high-profile Congressman's name was mentioned in headlines about two months ago after his son Mohammed Nalapad was accused of thrashing an injured man at an upmarket restaurant in Bengaluru.

Two days after the brutal assault that left the victim with swollen eyes and blood-soaked clothes, Nalapad, 24, surrendered. He was charged with attempt to murder and sent to jail. His bail plea in March was also rejected.

The incident had deeply embarrassed the ruling Congress, which was targeted by the opposition in Karnataka. They accused Chief Minister Siddaramaiah of failing to maintain law and order in the state; and NA Haris of shielding his son.

The two-time lawmaker later apologised for his son's conduct and said, "Children make mistakes... we cannot disown or abandon them."

The Congress quickly sacked Nalapad as the state unit's Youth Congress general secretary and there were doubts whether Mr Haris would be fielded again in the high-voltage elections.

After being kept on tenterhooks for days, when his ticket was confirmed today, Mr Haris thanked the "Almighty Creator", Congress chief Rahul Gandhi and Siddaramaiah. He will file his nomination papers tomorrow.

Today's list also replaced candidates in six previously assigned  constituencies. Badami in north Karnataka, which had earlier been announced by the Congress for Dr Devraj Patil, now has a new nominee -- Siddaramaiah.

This will be the Chief Minister's second constituency. He has already filed his nominations from Chamundeshwari in Mysuru.

Among the other candidates who were replaced was Madikeri lawmaker HS Chandramauli, who represented fugitive diamantaire Mehul Choksi as his lawyer.
Comments
NA HarisshantinagarMohammad Nalapad