Mr Kumaraswamy, who holds a BSc degree, was asked about JDS minister GT Devegowda reportedly being upset at being given the higher education portfolio, especially as his own formal education has been limited. 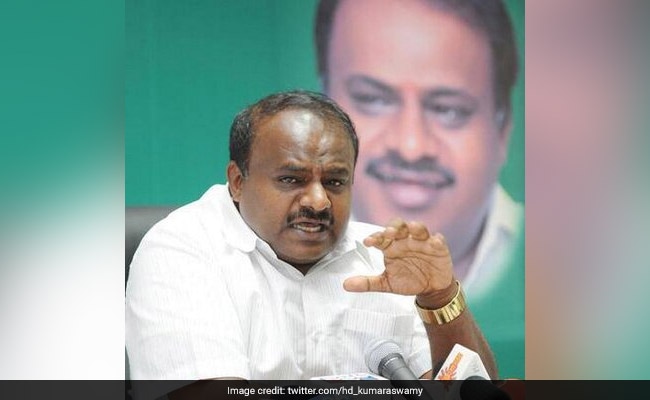 Bengaluru: Karnataka Chief Minister HD Kumaraswamy today dismissed questions on the allocation of the Higher Education portfolio to a minister who has studied till Class 8. "What have I studied? I'm working as the chief minister," he said.

Mr Kumaraswamy, who holds a BSc degree, was asked about JDS minister GT Devegowda reportedly being upset at being given the higher education portfolio, especially as his own formal education has been limited.

GT Devegowda, who defeated former chief minister Siddaramaiah in Chamundeshwari constituency in Mysuru in the May 12 assembly polls, was said to be eyeing key portfolios, according to party sources.

On reported comments by GT Devegowda about being given Higher Education, when he had just studied till the eighth standard, the chief minister said, "What have I studied? I'm working as the chief minister. Should I give Finance? There will be demand for certain ministries, but certain decisions are made internally in the party," he told reporters in Bengaluru, adding that such wishes of becoming a minister first and then wanting certain specific portfolios are common.

Earlier, the chief minister had drawn flak for saying he was at the "mercy" of the Congress and not the people. Mr Kumaraswamy later said he never meant to show disrespect to the people of the state.

"What I meant was so long as they (Congress) support me I can continue. So, whatever programmes we have to pursue, I will be at the mercy of Congress," he said.

Mr Kumaraswamy had last night allocated portfolios but it has left some upset including GT Devegowda and CS Puttaraju, who got the Minor Irrigation portfolio.

Mr Kumaraswamy retained the key Finance department, as also Energy with him while giving Home to his deputy G Parameshwara of the Congress.

Promoted
Listen to the latest songs, only on JioSaavn.com
The chief minister had inducted 25 new ministers on June 6, including those from his party JD(S), Congress, BSP, and the fledgling KPJP.

The JDS leader became the chief minister after the Congress offered support to the party keep out the BJP. In the 225-member Assembly, including one nominated, the Congress has 78 MLAs, the JDS has 36 and the BJP 104, with three others.