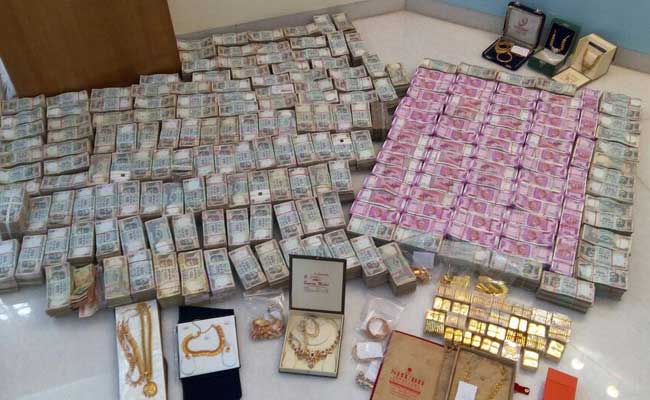 Cash worth crores was stashed inside the bathroom tiles of a hawala dealer in Karnataka.

Bengaluru: In a startling catch, the Income Tax department on Saturday seized Rs 5.7 crore cash in new notes, 32 kgs of gold biscuits and jewellery and Rs 90 lakh worth old notes stashed inside the bathroom tiles of a hawala dealer in Challakere in Karnataka.

The department seized the alleged undisclosed assets, as part of its raids against black money hoarders post demonetisation, from the residence of the hawala operator. The identity of the accused has not been reveled yet.

The Challakere town, about 40 kms from district headquarters of Chitradurga, is popularly know as the 'oil city' due to the presence of a number of edible oil mills in Bengaluru.

Officials said the taxman raided the premises based on intelligence inputs about the presence of huge cash and the sleuths were startled to find a cleverly-hidden stainless steel safe, above the wash basin, inside the tiled walls of the bathroom.

The cash stash of Rs 5.7 crore, all in new Rs 2,000 notes, 28 kg of gold biscuits, 4 kg of other gold and jewellery was stuffed inside the bathroom safe, which was kept sanitised against termites using hundreds of mothballs.

The assets were recovered after the department's investigation wing in Panaji on Friday began searches against casino and bullion traders in Hubballi and Chitradurga districts.

A good number of documents and another Rs 90 lakh cash (Rs 100/20 notes) has been seized after the searches on the said hawala dealer, they said.

Promoted
Listen to the latest songs, only on JioSaavn.com
"The searches in this case are still going on at various places and the valuation of the bullion and jewellery is being conducted," they said.