The Rajya Sabha polls gain in importance as the BJP-led NDA plans to push through several key bills ahead of the elections. 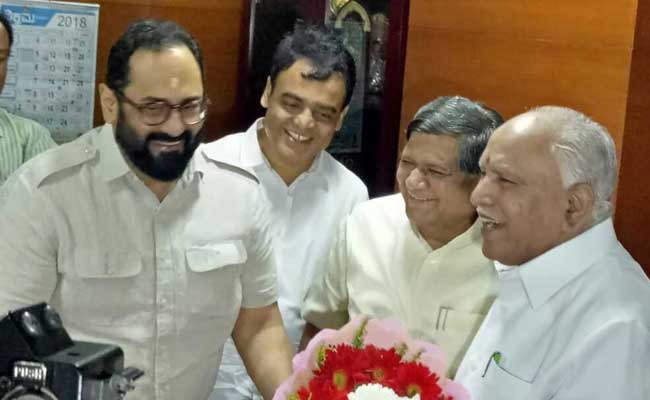 Bengaluru: The nominees for Karnataka's four Rajya Sabha seats are set to win. Monday was the last day of filing nominations and given respective party strengths in the state legislature, all four candidates have the numbers to comfortably go through to the upper house.

The Congress has fielded its state vice president L Hanumanthaiah, party spokesperson Naseer Hussain and party secretary GC Chandrashekar. The BJP has fielded sitting lawmaker from Rajya Sabha, businessman Rajeev Chandrashekar, who was an independent and joined the party today.

BJP state chief and former chief minister, BS Yeddyurappa, who was with Chandrashekhar at the state assembly during the filing of nomination, said he has done much for the state over the last 12 years.

"When I was the Chief Minister during the 2009 floods in north Karnataka, he helped build thousands of houses. He also prepared vision 2020 document for Bangalore. We have got sufficient votes to win Rajya Sabha in first round itself," Mr Yeddyurappa said.

"As you all know, for the last two terms in Rajya Sabha, I have been an independent MP. Today, I have decided and chosen to join the BJP," Mr Chandrasekhar said.

The 53-year-old, who has been vocally critical of the Congress government in the state led by Siddaramaiah, said: "(For) My third term as MP, I oppose corruption of any sort in the state. I strongly believe that the last 5 years Karnataka has been through the darkest period in modern history. I think a new government is necessary in 2018 to recover the lost ground."

"I hope now to work with a larger party organisation working behind me to achieve the goals set by the PM for New India and hopefully a corruption free Karnataka," he added.

The assembly election in Karnataka, due later this year, is seen as the dress rehearsal for the state ahead of next year's Lok Sabha polls. The Rajya Sabha polls gain in importance as the BJP-led NDA plans to push through several key bills ahead of the elections. On March 23, elections will be held for 58 Rajya Sabha seats and the BJP-led NDA has taken several strategic decisions to increase their strength in the upper house.

The total number of seats in Rajya Sabha is 245 and 126 seats are needed for a majority. The BJP currently has 58 seats - four more than 54 seats of the Congress. But the BJP rules 11 of the 16 states where Rajya Sabha elections will be held.

The Congress, which has lost a string of states in the assembly elections held over the last two years, hopes to gain the three seats in Karnataka.

Promoted
Listen to the latest songs, only on JioSaavn.com
"He (Rahul Gandhi) selected us in sending a good message to the country... that is, new faces, the youngsters, can also come to the Rajya Sabha and also in the future," said party candidate GC Chandrashekar,  former Chairman of Karnataka Urban Water Supply and Drainage Board.

"The main focus will be to raise issues that concern the common man of Karnataka," said his party colleague His party colleague Naseer Ahmed. "The farmers of Karnataka are facing a very tough time because of severe drought of last three years. These issues especially water sharing and many other issues which concerns the youth farmers, the student, and the backward social communities."