No Question Of BS Yediyurappa's Resignation: Minister Who Complained Against Him

K Siddaramaiah, who is the leader of opposition in the state assembly, has demanded that the Chief Minister step down from his post. 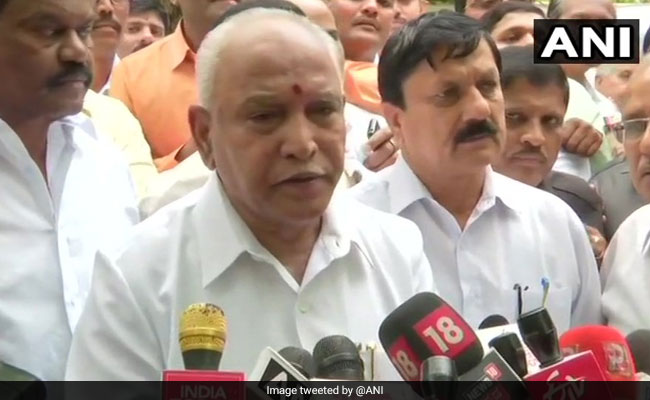 There's no question of Yedyurappa's removal as Karnataka Chief Minister, a minister said.

Following Mr Eshwarappa's recent complaint to the Governor against Mr Yediyurappa, alleging direct interference in the affairs of his department, K Siddaramaiah, who is the leader of opposition in the state assembly, has demanded that the Chief Minister step down from his post.

He had also urged the Governor to intervene and recommend for the President's rule in the state.

Speaking to reporters, he said there is no question of Mr Yediyurappa resigning and Mr Siddaramaiah should not be under the illusion of becoming the Chief Minister.

"The former Chief Minister is unable to digest our organisational strength, also he doesn't have anything to criticise PM Modi-led government at the Centre or the government with as both are doing a good job," he said.

"That's the reason he (Siddaramaiah) is latching on the letter to Governor and is demanding for CM's resignation.

Eshwarappa, who is Rural Development Minister in Yediyurappa's cabinet on Wednesday had complained to the Governor against the Chief Minister alleging direct interference in the affairs of his department.

He had met Governor Vajubhai Vala and submitted a five-page letter on serious lapses and authoritarian way of running the administration by the Chief Minister, in which he pointed at three instances where Yediyurappa sanctioned funds without taking him into confidence.

Commenting on his meeting the Governor and submitting a letter, Mr Eshwarappa said, minor administrational differences were there and efforts are on to rectify them.