No One Should Come To School For Practising Their Religion: Karnataka Minister

Speaking to reporters in Bengaluru, Karnataka Home Minister Araga Jnanendra said no one should come to school for practising their religion, as it is a place where all students should learn together with a feeling of oneness. 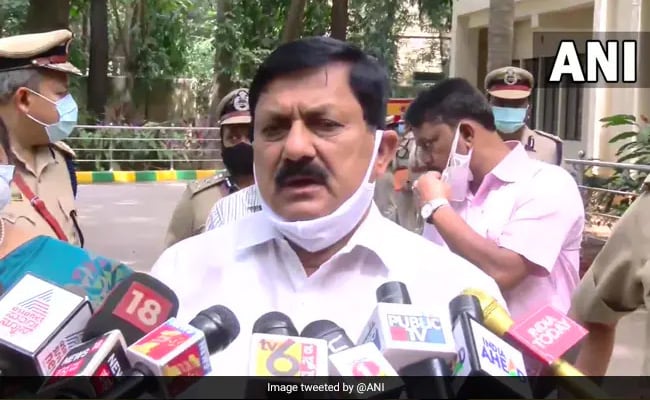 Schools are the place where children belonging to all religions should learn together: Araga Jnanendra

Karnataka Home Minister Araga Jnanendra on Thursday said children should neither wear hijab nor saffron shawls at schools and he has asked the police to keep watch on religious organisations that are trying to undermine the country's unity in this regard.

Speaking to reporters in Bengaluru, he said no one should come to school for practising their religion, as it is a place where all students should learn together with a feeling of oneness.

The remarks come amid a row over wearing 'hijab' (headscarf) by some students at a government pre-university college at Udupi. In another incident, Muslim girl students of the Kundapur PU college, who reached the institution today wearing the hijab, were stopped at the gate by the principal. They were informed that they are not allowed to wear the headscarf inside the classrooms and asked to remove it before entering. Yesterday, around 100 Hindu students came to classes wearing saffron shawls as a counter to the girls wearing hijabs.

"Schools are the place where children belonging to all religions should learn together and imbibe a feeling that we are not different, and all are children of Bharat Mata," Mr Jnanendra said in response to a question.

Speaking to reporters, he said, there are places like Churches, Mosques and temples for people to freely practise their religion and offer prayers, while at schools there should be an academic atmosphere for children to develop a culture of national unity integrity.

Calling on everyone to think in this direction, he said, "There are religious organisations who think otherwise, I have asked police to keep a watch on them. Those who cause hindrance or undermine this country's unity, they have to be dealt with," he said.

Responding to a question about Hindu students wearing saffron shawls as a retaliatory measure for hijab and creating an atmosphere of conflict, Mr Jnanendra said, no one should come to school for practising their religion.

"Everyone should come there to learn as the children of Bharat Mata. No one should wear either hijab or saffron shawl in the school premises, they should mandatorily follow the rules set by school management committees," he added.