The question was included in the examination without the knowledge of the administration, the principal said. 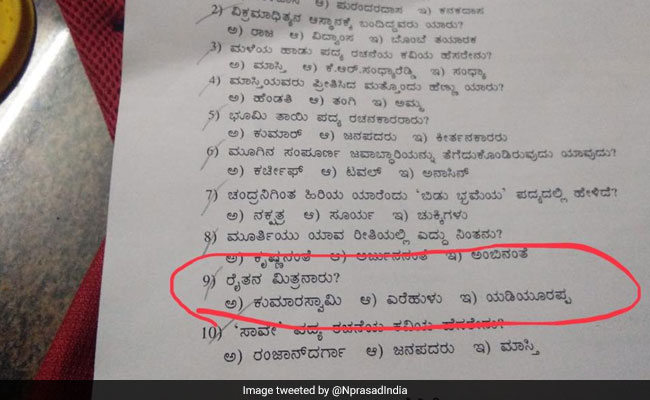 A faculty member of Mount Carmel English High School in Bengaluru was sacked after its question paper for class 8 students asked if a farmer's friend was an earthworm or Chief Minister HD Kumaraswamy or BJP leader BS Yeddyurappa, an official said on Thursday.

"The faculty member responsible for setting the question paper was dismissed from the post," Raghavendra, the principal of the school in the city's southwestern suburbs, told the media.

The question, which was asked in the annual examination paper for Kannada language for 8th standard students, soon went viral on social media platforms for its political tone.

It was included in the examination without the knowledge of the administration, the principal added.

In the southern state, BJP state unit President Yeddyurappa calls himself a "raitha bandhu" (farmers' friend), while HD Kumaraswamy has often referred to himself as the farmers' leader, as a means of wooing the state's farming community.

The question in the examination, however, did not intend to promote any political party or ideology, the school administration asserted.