The Congress-JDS coalition government was thrown into a crisis on Saturday after the resignation of 11 lawmakers. 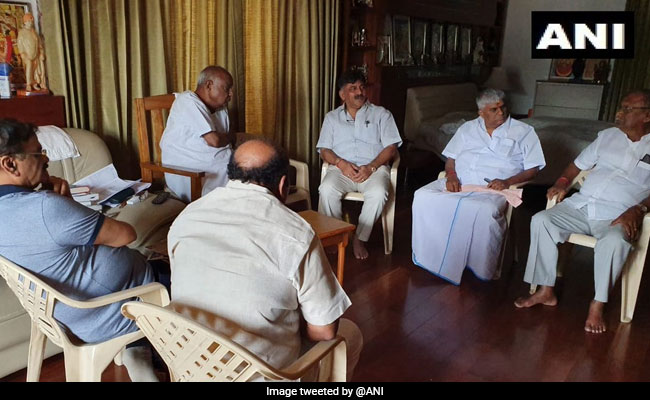 HD Deve Gowda and senior leaders of the JDS-Congress alliance held a series of meetings.

The Congress and Janata Dal Secular have been holding a series of meetings since morning to consider the possibility of saving the government after a tumultuous Saturday, which saw the resignation of 11 legislators from Karnataka's ruling coalition.

The Congress's state in charge, KC Venugopal, has come to Bengaluru and met state party leaders at a private hotel.

Former prime minister and JDS veteran HD Deve Gowda is meeting party leaders ahead of the return of his son, chief minister, HD Kumaraswamy, this evening from a private visit to the United States.

Congress's troubleshooter DK Shivakumar, who tore up the resignation letters of the legislators to stop them from quitting, also went across to meet Deve Gowda.

Former Congress chief minister, Siddaramaiah, insists all is well. "There is no threat to the coalition government. It is safe," he said.

Senior Congress leader Mallikarjun Kharge said the party is in still in touch with the rebels. "We will get a clear picture on the July 12," he added. The assembly session starts that day.

Of the 11 legislators who quit on Saturday, three were from the JDS, including former state president, H Vishwanath, who stepped down from that post recently. Two Congress MLAs had resigned on Monday - bringing the total of coalition legislators who had resigned to 13.

Mr Vishwanath had mentioned the figure 14 after the legislators met the governor after submitting their resignations at the speaker's office. The resignations, even of those who quit on Monday, have not been formally accepted yet. Speaker Ramesh Kumar said he would look at the latest batch of resignations only after he returns to work on Tuesday.

Mr Kharge also said rumours about plans to make him the next chief minister were just that - rumours. "The BJP is trying to sabotage non-BJP governments in many states. I am frightened about what is happening to democracy in this country. The BJP arranges a special flight to take the MLAs to Mumbai. What is happening is not right," he said.

The BJP continues to deny any involvement - even though the plane that took the dissidents to Mumbai was said to be arranged by them and despite the visits of BJP leaders to the hotel in Mumbai where the rebels are staying.

State party chief, BS Yeddyurappa said, "We are no way related to what is happening."

Mr Yeddyurappa and other BJP leaders have said they are ready to form the government in the state if the coalition government does indeed fall.