"Bajrang Dal activists argued and then attacked a Muslim vendor. An FIR has been registered at Hosamane police station in Bhadravati," the Shivamogga SP said. 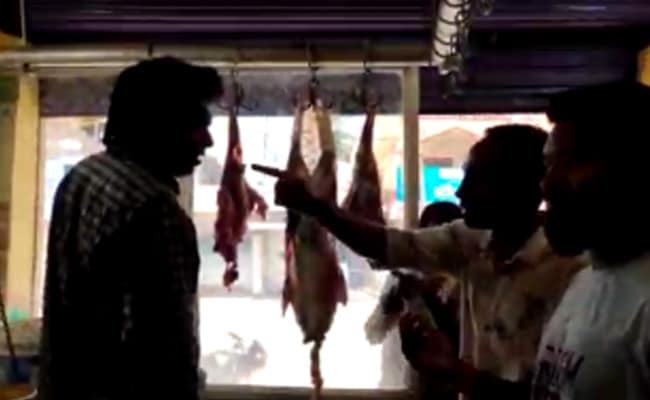 According to police complaint, the activists asked him to sell 'non-halal' meat at his chicken shop.

Shivamogga Superintendent of Police (SP) BM Laxmi Prasad told ANI that an FIR has been registered under relevant sections.

"Bajrang Dal activists argued and then attacked a Muslim vendor. An FIR has been registered at Hosamane police station in Bhadravati," the Shivamogga SP said.

Police said that some Bajrang Dal activists around 12.30 pm on Wednesday were campaigning in the Hosamane area against 'halal' meat. They allegedly threatened Muslim meat vendor Thousif.

According to the complaint with the police, the activists asked him to sell 'non-halal' meat at his chicken shop. He told them that such meat was not ready and he would arrange it. Irked by it, the activists allegedly thrashed him. Following a complaint, cops have started a probe and interrogated five right-wing activists, the police said.

In another incident in the communally sensitive Shivamogga district, police registered a case against the same Bajrang Dal activists for allegedly threatening and abusing a hotelier in Old Bhadravati for not serving 'non-halal' meat to them. A case has been registered on charges of abusing the hotelier.

Mr Bommai on Wednesday said that the state government will look into 'halal' meat issue as "serious objections" have now been raised against it.

"The halal issue has just started. We have to study it. It's a practice that is going on. Now serious objections have been raised about it. I will look into it," Mr Bommai said at a press conference.

Asked about the call for boycott of halal meat by some right-wing organizations, Mr Bommai said, "As far as my government is concerned, we are not right-wing or left-wing, only growth wing."