The authorities, who took away the bomb in a reinforced vehicle, later "neutralised" it through a controlled explosion.

Police have launched a hunt for the suspect, who was seen going away in an autorickshaw.

An alert was sounded at the Mangaluru International Airport on Monday morning, after security personnel found a live explosive on its premises. Central Industrial Security Force (CISF) officials said they have zeroed in on a suspect, who was seen leaving the airport in an auto rickshaw.

"Our jawans found an abandoned bag this morning, after which the bomb disposal squad was immediately informed. A low-intensity improvised explosive device with all components except a trigger was found inside the bag," said CISF Deputy Inspector General Anil Pandey.

According to news agency PTI, the "live" explosive was found in a black laptop bag near the aiport's ticket counter. Not willing to take any chances, the bomb disposal squad cordoned off the area before taking it away in a reinforced vehicle. By evening, they had "neutralised" the bomb by carrying out a controlled explosion in an open field far away from the airport.

The case has now been handed over to the Mangaluru police for investigation. They have released photographs of the suspect -- a bespectacled man wearing a light-coloured shirt and a white baseball cap -- as well as the auto rickshaw that drove him away. His face, however, cannot be seen clearly.

"We have taken steps to neutralise the bomb. Inquiries are on to identify the people responsible," said Karnataka Home Minister Basavaraj Bommai.

Mangaluru Police Commissioner PS Harsha later described the manner in which the situation was handled in collaboration with airport security personnel. "Around 9 am, a middle-aged suspect brought a bag containing explosive substances into the airport. The CISF spotted it and subjected it to tests as per security protocol. As they grew suspicious, they informed the Mangaluru police control. The bomb disposal team was immediately pressed into action. After an initial assessment, relevant containment procedures were initiated and the area was cordoned off," he told reporters. 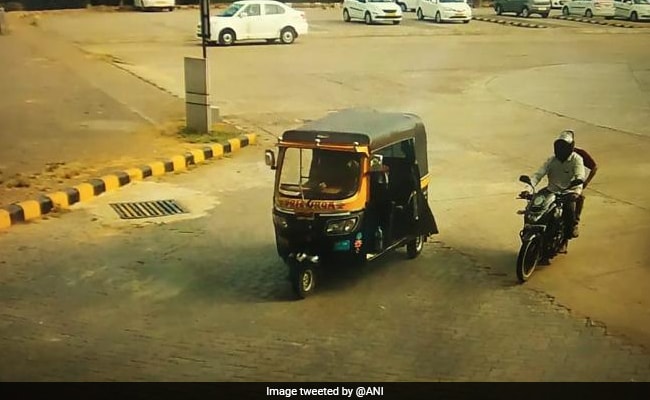 The auto rickshaw that carried the suspect away.

Mr Harsha said that the local police have registered an FIR under various sections of the Explosives Substances Act and Unlawful Activities Prevention Act. "Three police teams have already been formed to identify and arrest those responsible," he said, adding that a preliminary inquiry has zeroed in on a man in formal wear and a cap.

Police have shared photographs of the suspect, and asked residents of the southern city to share any information they may have. "I am confident of catching the culprit soon," Mr Harsha said.

Besides other airports, railway stations across Karnataka have also been placed on high alert.

Former Chief Minister HD Kumaraswamy said it should not be very difficult for the police to nab those responsible for planting the explosive. "The airport has CCTVs. It is not that difficult to find out the perpetrators. But the police have sought a month's time, apparently," he told reporters.