"... discussion also has to happen regarding the cabinet expansion, I will bring it to his notice and take clearance and leave for Bengaluru tomorrow," BS Yediyurappa said, adding that he will meet BJP national President JP Nadda in the evening. 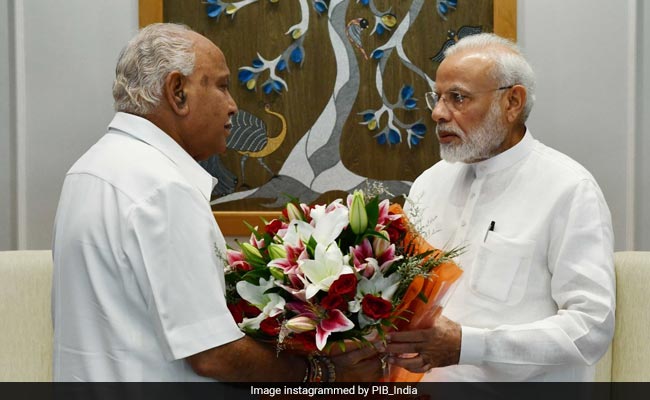 The meeting at the Parliament House lasted for 15 minutes, an official release from the state information department said.

During the meeting, Mr Yediyurappa extended an invitation to PM Modi to inaugurate Bengaluru Tech Summit on November 19 on a virtual mode, it said.

The state government's flagship 'Bengaluru Tech Summit', actually scheduled in September this year, was postponed to November in view of the COVID-19 pandemic.

This year's BTS is expected to focus on leveraging technology to tackle challenges brought to the fore by the pandemic and there will be symposiums and tech-related talks by experts and technologists.

Ahead of his meeting with Prime Minister Modi, the Chief Minister said, he will discuss all the issues concerning the development of the state, also regarding the state cabinet expansion.

"... discussion also has to happen regarding the cabinet expansion, I will bring it to his notice and take clearance and leave for Bengaluru tomorrow," he said, adding that he will meet BJP national President JP Nadda in the evening.

According to release, the Chief Minister during today's meeting appealed to the Prime Minister to expedite the release of funds from the National Disaster Response Fund.

He also made a request for necessary action for early approvals and clearances for irrigation and drinking water projects including Mekedatu and Kalasa Banduri Nala to utilise the precious water resources allocated to the State, the release added.