Karnataka Bypolls: BJP candidate Narayana Gowda defeated BL Devaraj of JDS by over 9,700 votes in KR Pete of Mandya district that has been dominated by Congress and JD(S) for decades, and BJP had no presence. 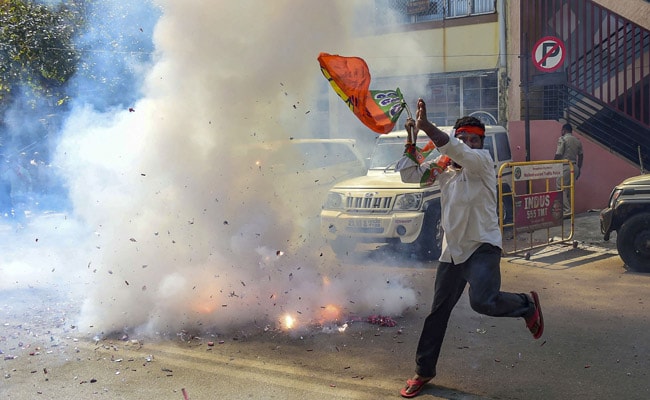 The ruling BJP in Karnataka on Monday scripted history by recording its first ever win in the Vokkaliga bastion of Karnataka's Mandya district.

It was also a dream come true for Chief Minister BS Yediyurappa.

The Amit Shah-led party also opened its account in Chikkaballapura and Gokak assembly segments in the December five bypolls, the results of which were declared on Monday.

BJP candidate Narayana Gowda defeated BL Devaraj of JDS by over 9,700 votes in KR Pete of Mandya district that has been dominated by Congress and JD(S) for decades, and BJP had no presence.

Mr Gowda is one among the three disqualified JD(S) legislators who the BJP had fielded as its candidate in the bypolls.

Taking special interest in ensuring BJP's victory in KR Pete under which his birth place Bookanakere comes, Chief Minister BS Yediyurappa had deputed his son BY Vijayendra to oversee the election-related activities in the constituency.

"It gives me an immense pleasure that Narayana Gowda has won from KR Pete. It is the same place where my village Bookanakere is located and where I was born, but we had never won the election. I congratulate him," Mr Yediyurappa told reporters.

Celebrating Mr Gowda's victory, BJP state chief Nalin Kumar Kateel said, "In certain regions such as KR Pete and Chikkaballapura, BJP had never won the election. Mandya had been the JD(S) citadel, but today he (Narayana Gowda) has brought us victory from there".

In the 2018 Assembly elections, the JD(S) had won all the eight assembly segments in Mandya district with a substantial population of the dominant Vokkaliga community.

Despite losing Mandya Lok Sabha seat in the bypolls in November 2018, BJP had made significant inroads in the district for the first time, with party candidate Siddaramaiah, a political greenhorn and former civil servant securing 2,44,404 votes, its best performance there.

With K Sudhakar's victory from Chikkaballapura, BJP has opened its account in the constituency.

Mr Sudhakar, a two-time Congress MLA from the constituency, won the bypolls on a BJP ticket against M Anjanappa of Congress by a margin of 34,801 votes.

In Gokak, that saw a battle between the Jarkiholi brothers, Ramesh Jarkiholi of BJP by defeating his brother Lakhan from Congress by a margin of 29,006 votes, has ensured the first ever victory for the saffron party there.

Ramesh Jarkiholi, who had represented Gokak five times in the assembly on a Congress ticket, this time contested as a BJP candidate. Both Mr Sudhakar and Ramesh Jarkiholi are among 13 disqualified legislators whom the BJP had fielded as its candidates in the bypolls.