"It's My Decision": Karnataka Minister Refuses To Wear Mask Amid Covid

Umesh Katti, a BJP leader, is the current Minister of Food, Civil Supplies and Consumer Affairs and Forest in the state. 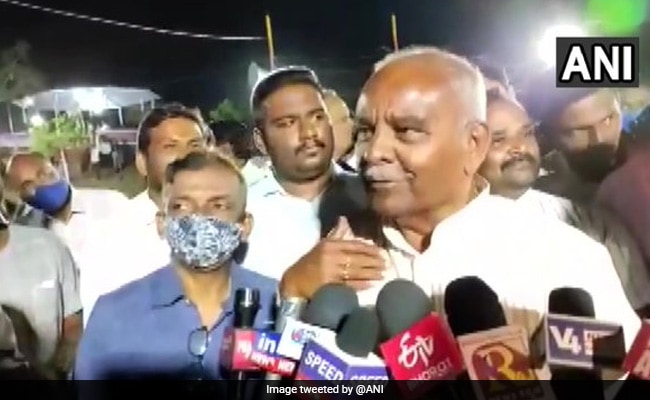 "I am not interested in wearing it so I haven't. It is my individual decision," Umesh Katti said

Amid rising COVID-19 cases and several government restrictions in place to contain its spread, Karnataka Minister Umesh Katti, who was seen without wearing a mask at a public event, refused to do so claiming that Prime Minister Narendra Modi had said "it is individual's responsibility".

"The Prime Minister has said that no restriction will be imposed and that it (wearing face mask) is an individual's responsibility. Whoever wishes to wear a mask can do so. I am not interested in wearing it so I haven't. It is my individual decision," the Karnataka Minister told media persons on Tuesday.

Umesh Katti, a BJP leader, is the current Minister of Food, Civil Supplies and Consumer Affairs and Forest in the state.

His statement comes at a time when COVID-19 cases in Karnataka and across the country witnessed a rampant surge.

Recently, Karnataka Congress chief DK Shivakumar, after participating in party's padyatra, had reportedly refused to get tested for COVID-19 accusing the state government of trying to "infect" him with COVID-19 by exposing him to an official who tested positive for the virus.

"Additional District Commissioner who came to test me last night has tested COVID-19 positive. He was sent to make sure that I get infected and test positive. The Government wants to make me a primary contact of the COVID positive person and that is why the official had been sent," Mr Shivakumar had alleged.

"This may not be the idea of Chief Minister. But the Health Minister (K. Sudhakar) is capable of doing it," he added.

"No Uniform Code But...": Karnataka Minister On Muslim Students In Hijab Row