How Assembly Elections In Karnataka Can Play Out, In Numbers

Karnataka Polls 2018: The results of a poll of opinion polls, an average of the opinion poll results, show a slight decline for the BJP. 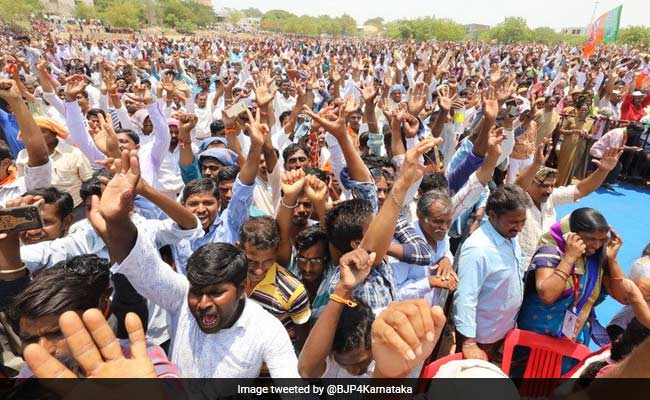 Karnataka election: The battle for Karnataka is expected to be a close fight.

Bengaluru: The assembly election in Karnataka, due on May 12, is seen as a high stakes battle between Congress Chief Minister Siddaramaiah and Prime Minister Narendra Modi, who is going all out to win back the first southern state the party had ruled. Opinion polls, however, have not given a clear majority to either party and increasingly, it appears that Prime Minister HD Deve Gowda's Janata Dal (Secular) may have the power to decide the outcome.

The results of a poll of opinion polls - an average of the opinion poll results - conducted in January and since, show a slight decline for the BJP. 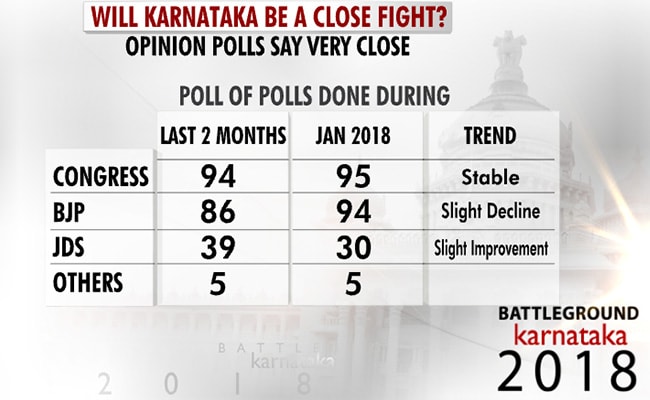 But this is not much different from the scenario that would have been there after the 2013 assembly polls, had BS Yeddyurappa been a part of the BJP. Mr Yeddyurappa, who led the BJP to a victory in 2008 and became the chief minister, had to step down following corruption charges. He walked out of the BJP and contested the 2013 elections at the head of his own party. He rejoined BJP within a year and is the BJP's Chief Ministerial candidate this time. 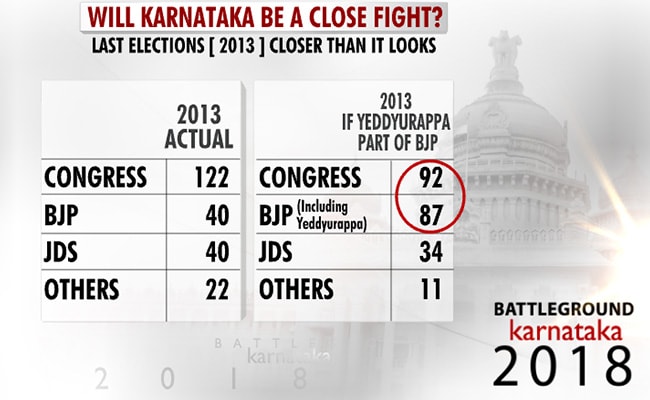 The battle for Karnataka is expected to be a close fight - a vote swing of 3 to 4 per cent either way can deliver a majority to the Congress, or the BJP.

The Congress is going to need only a 3 per cent swing for a majority - most of its gains could come from areas with a substantial population of Scheduled Castes and Tribes. 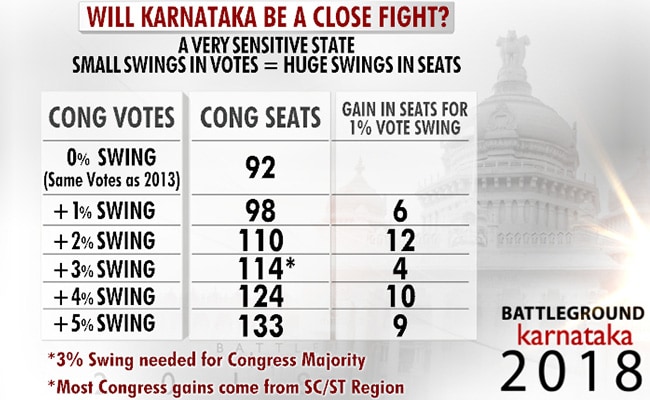 For the BJP, a 4 per cent vote swing is necessary for an outright victory. It could be possible if the Lingayats, traditional supporters of the party, continue to vote for it in face of the Congress move to swing the votes in its favour by giving the community the minority religion status. 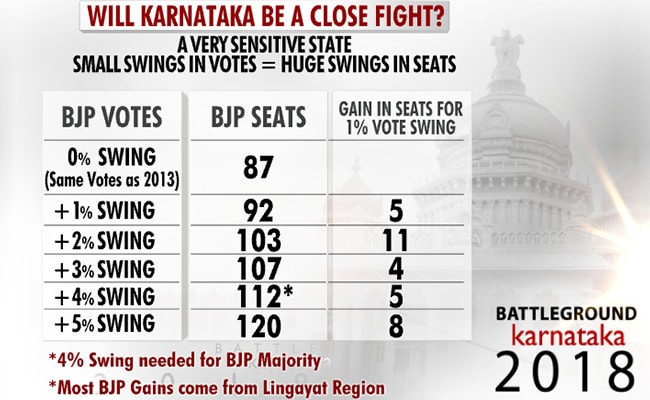 The leaders of all three parties - Congress chief Minister Siddaramaiah, BJP's Yeddyurappa and JD(S) leader HD Kumaraswamy, the son of Mr Deve Gowda - have expressed confidence about a clear verdict. Past experience shows that the state has given a hung verdict only in 15 per cent of the 14 assembly elections held till date. For the rest, the verdict was clear. 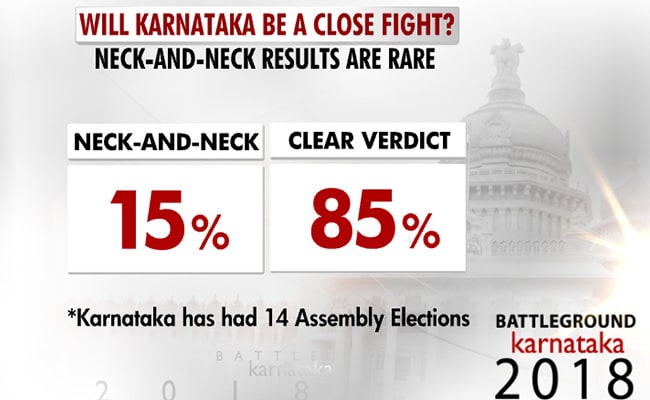 Caste is expected to be one of the key influencing factors in the state. Lingayat politics have dominated much of the campaign, with the community being able to influence the outcome in 62 seats. An equal number of seats can be influenced by the Scheduled Castes and Tribes - followed by Vokkaligas, Kurubas and the Muslims. 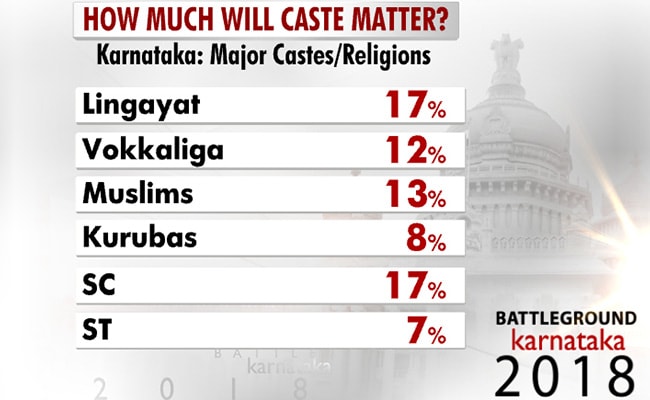 The BJP has traditionally been the big gainer in the Lingayat belt, the Congress has had a moderate advantage in the Muslim belt. The JD(S) gains in the areas dominated by the Vokkaligas. 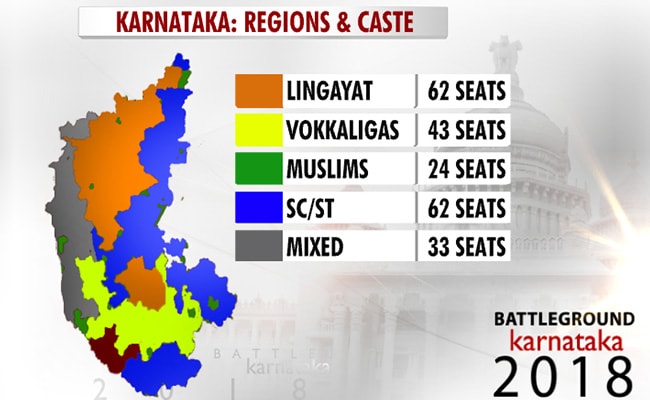 One assembly seat in Karnataka has managed to remain the bellwether seat for a dozen elections -- assembly and Lok Sabha -- and is the most watched seat in the state. Shirahatti, named after a panchayat town in central Karnataka's Gadag district -- has managed to vote for the winning party in the state and centre. Its streak has continued for seven assembly and five Lok Sabha elections. 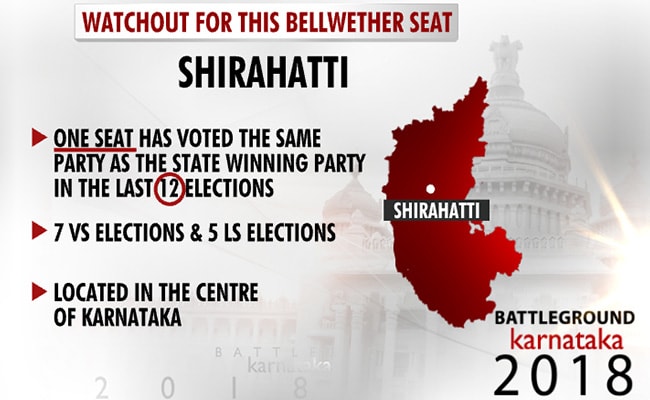 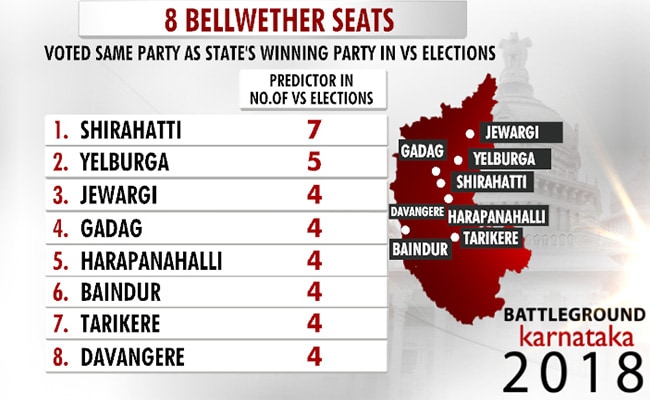 Elections for Karnataka's 224 seats will be held on May 12. The results will be declared on May 15.
Comments
Karnataka assembly election 2018KarnatakaYeddyurappa

Won't Be Cowed Down: HD Kumaraswamy On Threat Letter