HD Kumaraswamy Cabinet To Be Expanded On December 22

Congress president Rahul Gandhi and JD(S) supremo HD Deve Gowda were consulted before deciding the date, Siddaramaiah told reporters after the over two-hour long meeting of the committee. 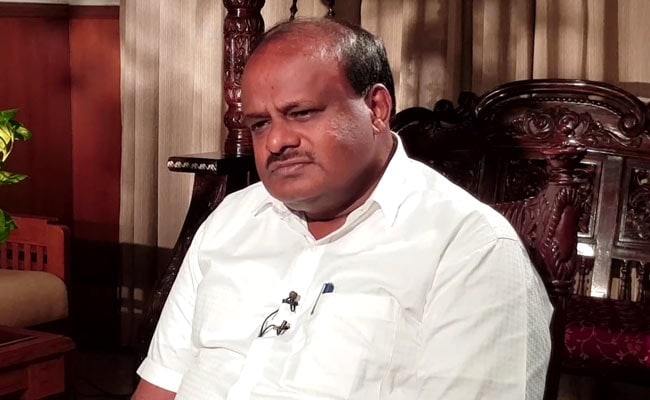 This will be the second expansion of HD Kumaraswamy's ministry. (File Photo)

Ending the suspense, the Congress-JD(S) coalition in Karnataka Wednesday announced that the HD Kumaraswamy cabinet would be expanded on December 22.

The decision was taken by the coordination committee of the coalition that met under the chairmanship of former chief minister Siddaramaiah.

Congress president Rahul Gandhi and JD(S) supremo HD Deve Gowda were consulted before deciding the date, Siddaramaiah told reporters after the over two-hour long meeting of the committee.

Six members from the Congress and two from JD(S) would be inducted, he said adding it was also decided to appoint MLAs as heads of corporations and boards on the same day.

There has been growing clamour among the MLAs, especially those from the Congress, for expansion of the cabinet at the earliest, with a few openly expressing their discontent over the delay.

This will be the second expansion of Mr Kumaraswamy's ministry, who currently heads the 26-member cabinet.

After the first expansion in June, discontent among the Congress ministerial aspirants surfaced, giving birth pangs to the coalition ministry formed in a post-poll pact after the May assembly elections threw up a hung verdict.

The cabinet was expected to be expanded in October itself, but had been put off.

Siddaramaiah said the plan was to expand the cabinet on December 9, but as the legislature session commences on December 10 in the northern district of Belagavi, the date had been deferred.

It would be expanded a day after the conclusion of the session on December 21. The former chief minister, who is also the leader of the Congress legislature Party (CLP) said the coordination committee also decided to appoint a few MLAs from both partner parties as Parliamentary Secretaries to Ministers.

Under the agreement reached during the formation of the coalition in May last, the chairmanship of 20 boards and corporations will go to Congress and 10 to JD(S). Chief Minister Kumaraswamy, Deputy Chief Minister G Parameshwara, Congress General Secretary K C Venugopal and JD(S) secretary general Danish Ali were the others who attended the coordination committee meeting.

Siddaramaiah said measures for smooth functioning of the government and speedy resolution of issues raised by MLAs concerning developmental work in their respective constituencies were also discussed at the meeting.

A few MLAs, especially those from the Congress, have reportedly conveyed their unhappiness to the party leadership about the functioning of the government -- against a few JD(S)Ministers, including Kumaraswamy's brother and PWD Minister HD Revanna.

Rubbishing reports about disgruntled MLAs under the leadership of Satish Jarkiholi of Congress planning to join hands with the BJP, Siddaramaiah pointed to Mr Jarkiholi himself denying them.

None of the Congress MLAs will leave the party, and such information was only a speculation in the media, he said.

Congress and JD(S) parties are totally intact, BJP is only day dreaming about success through operation lotus, but they will not succeed, it is not possible, their dream will remain a dream, he said.

The coalition government was stable and would remain so for its full tenure, Siddaramaiah said as he predicted BJP's defeat in the assembly elections in the five states.

He also termed reports about trouble in the coalition in sections of media as BJP sponsored.