The four men were arrested after a video of stone pillars at Hampi being damaged by some men went viral. 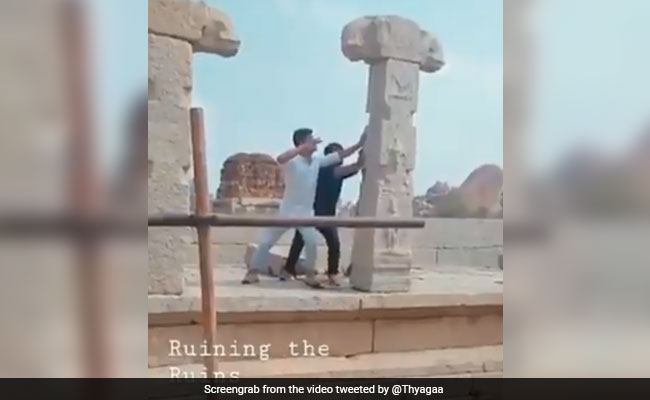 The Hampi video has led to concern over the safety of the protected sites.

Four men who vandalised the ancient ruins of the world-famous monuments in Karnataka's Hampi were made to re-erect the pillars by a local court, according to reports.

The four men were arrested after a video of stone pillars at the UNESCO world heritage site being damaged by some men went  viral on social media earlier this month. The clip shows three men pushing the artistically carved stone pillar to the ground, following which it breaks. Other damaged pillars are also shown lying around.

The men were taken to the heritage site and made to re-erect the heavy pillars in the presence of Archaeological Survey of India officials, the New Indian Express reported. It was only after this heavy duty work and a fine of Rs. 70,000 each that the men were let off, the report said.

While three of the men arrested felled the pillar, the fourth man shot the video, the police said.

The video has led to concern over the safety of the protected sites in the country. Locals had staged a protest, demanding that adequate security be provided to the monuments.

@AmitShah Sir request you to have a look on the video and pls take action against that maroon who is destroying our world heritage Hampi #savehampipic.twitter.com/Qd80vLYNgr

Following the incident, Karnataka's water resources minister DK Shivakumar had said the state government would not tolerate any act of causing damage to historical sites and stern action would be taken against the culprits.

Hampi, now a small village in northwest Karnataka, was the capital of the Vijayanagar empire. It was declared a UNESCO world heritage site. Known for its rich architecture, the ruins of the temples in Hampi are spread over a wide area. Hampi is a big draw for domestic and foreign tourists.

Recently, Hampi was listed second on the New York Times list of 52 must-go sites in the world.