"Some Of Our Lawmakers Want To Support BJP From Outside", Says JDS Leader

Barely four days after losing power, the JD(S) legislators were a divided lot over their next course of action. 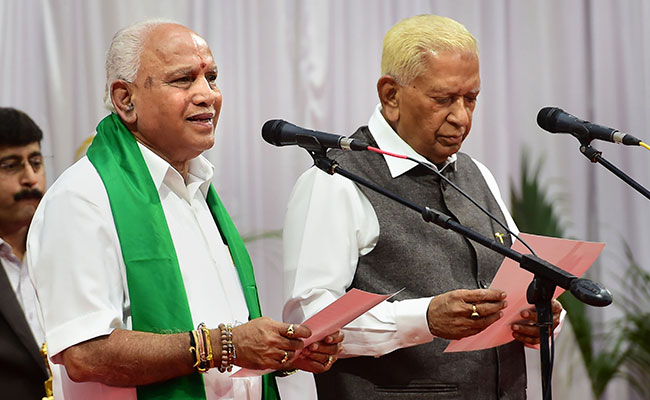 On Friday, BS Yediyurappa took oath as the Karnataka chief minister for the fourth time. (File)

A few JD(S) legislators, who met HD Kumaraswamy on Friday, have suggested that external support can be extended to the BJP government in Karnataka, party MLA and former minister GT Devegowda said on Friday, adding that the former chief minister would take the final decision.

Barely four days after losing power, the JD(S) legislators were a divided lot over their next course of action.

The difference of opinion among the legislators surfaced in a meeting convened by Mr Kumaraswamy on Friday night to decide the party's future course of action in the wake of upheavals in Karnataka politics.

After the meeting of party legislators in Bengaluru, Mr Devegowda said, "We (MLAs) discussed the future course of action. Some have suggested that we should sit in the opposition, while some legislators are of the opinion that we should support the BJP from outside."

"We have authorised Mr Kumaraswamy to take the final decision," he said.

The development came on a day BJP leader BS Yediyurappa was sworn in as chief minister for a fourth time in a sudden twist to the protracted high political drama in the state with a big challenge to manage numbers staring him in the face.

Shortly after taking the oath, Mr Yediyurappa said that he would move a motion of confidence in the Assembly on July 29, to prove his majority.

Mr Yediyurappa alone took the oath succeeding Mr Kumaraswamy three days after the Congress-JDS coalition government crumbled under the weight of a rebellion by a big chunk of its lawmakers, when it lost the motion of confidence in the state assembly.

The JD(S) and its ally in the previous government - the Congress - had alleged that the BJP was the root cause behind unseating them from power by luring and threatening their MLAs.

Amid speculations about BJP and JD(S) joining hands, Mr Yediyurappa had recently ruled out any possibility of alliance with the regional party, having bitter experience in the past.

The BJP and JD(S) had formed a coalition government in 2006 with Mr Kumaraswamy as chief minister and Mr Yediyurappa as his deputy, under a power sharing formula of 20 months each.

That government had collapsed as the JD(S) did not transfer power to BJP, paving the way for the party to win elections in 2008.