For Karnataka Bypolls, Contest Between "Crorepatis" Across Parties

The constituency on the outskirts of Bengaluru is seeing a three-cornered contest between BJP, Congress and JDS supported independent candidate. 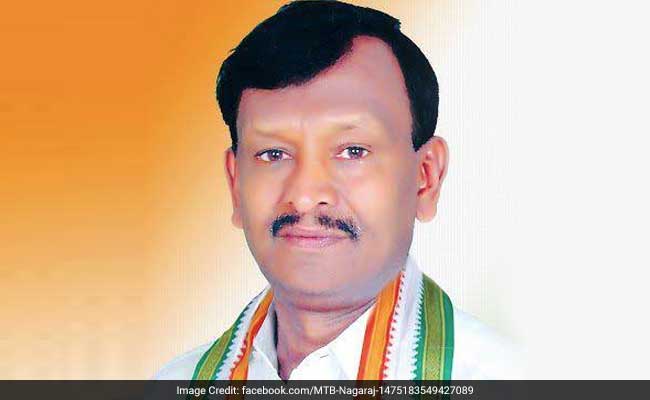 MTB Nagaraj among state's "richest politician," with assets worth Rs 1,015 crore in 2018

Hoskote, one of the 15 assembly constituencies that is expected to witness a high stake battle for December 5 bypolls in Karnataka has "Crorepatis" in the fray.

The constituency on the outskirts of Bengaluru is seeing a three-cornered contest between BJP, Congress and JDS supported independent candidate.

While the ruling BJP has fielded MTB Nagraj, one of the disqualified Congress MLA, as the party candidate; Congress has fielded Padmavathi, who is the wife of Hebbal legislator Byrathi Suresh.

JDS has decided not to filed any candidate, and has extended support to BJP's rebel Sharath Bachegowda, who is contesting as independent candidate.

According to an election affidavit of MTB Nagaraj filed along with his nomination, his total assets are worth about Rs 1,200 crore, which has grown by over Rs 180 crore in the last 18 months.

MTB Nagaraj, considered one among the state's "richest politician," had declared assets worth about Rs 1,015 crore during the 2018 assembly polls.

One among the 17 disqualified legislator, whose resignation and absence from the trust vote led to the collapse of HD Kumaraswamy headed coalition government and paved way for BJP to come to power, he has movable assets worth Rs 419.28 crore, while his wife M Shanthakumari has Rs 167.34 crore.

The couple has loans from banks and financial institutions to the tune of Rs 27.90 crore and Rs 1.57 crore respectively.

MTB Nagaraj also owns high-end cars including Prado, Fortuner, Benz, Bolero, Land Rover and an i10 together worth over Rs 2.54 crore, while wife owns a Porsche worth Rs 1.72 crore.

Interestingly, many have pointed out the 50 odd deposits in his account during the first week of August, soon after the fall of coalition government, most of them worth over Rs 90 lakh.

Defending his assets MTB Nagaraj has said, he had paid taxes for it.

He said he was a businessman and had not joined the BJP for monetary reasons.

On the other hand, Congress candidate Padmavathi along with her husband, Byrathi Suresh, who is MLA from Hebbal have assets worth Rs 424 crore, the election affidavit said.

Padmavathi who is making electoral debut has declared her occupation as business.

Mr Suresh has major share in the properties. The couple have cars worth Rs 3.13 crore, they include- Prado, Audi, Hyundai i20, JCB (backhoe), Benz, Innovas, Mahindra jeep.

On the other hand, Sharath Bachegowda, who is contesting as independent candidate, rebelling against the BJP, after the party denied him the ticket favouring disqualified Congress MLA MTB Nagaraj, has declared assets worth Rs 138 crore along with his wife Pratibha in his election affidavit.

Sharath Bachegowda, the son of BJP MP from Chikkaballapura, BN Bachegowda, has declared his occupation as public service and business.

He has also declared certain cases pending against him.