As part of the state government's delay in reopening schools, they brought handcarts carrying vegetables to highlight their grim financial situation 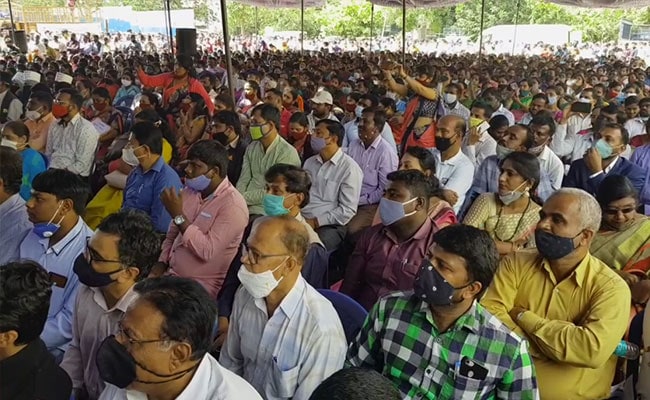 The state government sent senior representatives to talk to the protesting educators.

Financially stressed because of being shut for months due to the coronavirus pandemic, the staff and managements of several schools in Karnataka on Wednesday gathered to protest at Bengaluru's Freedom Park. As part of the protest against the state government's delay in reopening schools, they brought handcarts carrying vegetables to highlight their grim financial situation -- and how many teachers are being forced to take up alternative jobs in the absence of regular salaries. Their demands from the state government include vaccination on priority, medical insurance and food kits for teachers and support staff.

Schools and colleges were ordered shut by the central government in March, when Prime Minister Narendra Modi announced the first lockdown to arrest the growth of the virus in the country. The centre, a few weeks ago, left the decision of opening education institutions with states.

The Karnataka government hasn't announced a date for the reopening of schools yet; they have, however, said it will not happen before the end of the year. The schools have been running online classes and claim that some parents have not been paying fees, causing financial distress.

The state government sent senior representatives to talk to the protesting educators.

"Teachers also want to be considered Covid warriors - that is the main agenda. And starting the schools -- that is also a demand. And for the last one year, teachers are losing their payments. They also demand that government should help them. The CM (Chief Minister BS Yediyurappa) called me so I rushed to the protest area and received a memorandum. I will explain all the things to the CM. I think we will give some relief," Revenue Minister R Ashok told NDTV.

"There are several demands. We are considering them - looking into the final condition. It will be attended to immediately by the education ministry," Mr Bommai said.

After receiving reassurances from the ministers, the school managements say they will wait a couple of weeks for their demands to be met. If not, the protests will resume.