The Congress leader said it was unfair that he was not being allowed to pay his respects to his late father on the auspicious day. 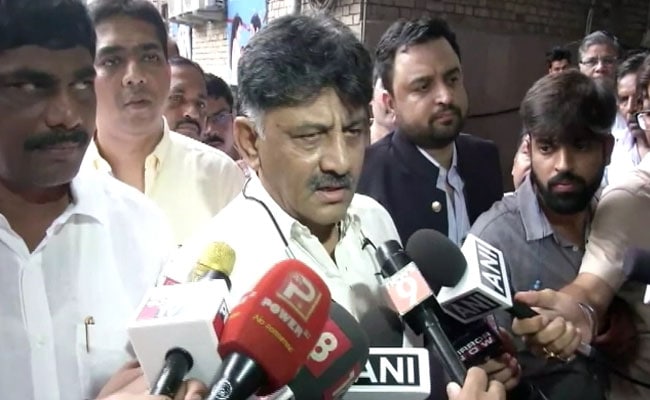 This was the third time the Congress leader appeared before the Enforcement Directorate.

When Karnataka Congress leader DK Shivakumar appeared before the Enforcement Directorate for the third time in connection with a money-laundering case on Monday, it was with a word of regret over not being allowed to pay his respects to his late father on the occasion of Ganesh Chaturthi.

"I was supposed to pay my respects to my father and perform some rituals today, but these people wouldn't even let me do that. But I have come anyway, for the sake of the people and my party," he told local media channels, his voice breaking with emotion. The 57-year-old leader and his party have repeatedly alleged that he is being framed by the ruling BJP.

"I am cooperating with the probe although I haven't taken a single rupee or committed a crime. Still, today is an auspicious day. My father gave me life, and I wanted to pay my respects to him. But neither the BJP nor the Enforcement Directorate is allowing me to do this. I hope their souls find peace," said Mr Shivakumar, who has gained repute as one of the Congress' main troubleshooters.

This was the third time the Kanakapura MLA has appeared before the Enforcement Directorate in connection with the alleged money laundering case involving funds of up to Rs 7 crore. The summons came a year after the probe agency registered a case against the Karnataka politician and four of his business associates under the Prevention of Money Laundering Act.

Janata Dal Secular leader HD Kumaraswamy had earlier criticised the Enforcement Directorate for forcing Mr Shivakumar to appear before it at a time when the entire country was celebrating Ganesh Chaturthi. "Gowri Ganesha is an important festival for Hindus. Mr @DKShivakumar had asked for a day to observe the festival. However, ED officials denied him even this. If this is not vindictive attitude, then what is?" he tweeted.

Vindictive politics has become the order of the day. Opposition leaders are easy victims of power misuse. In public life, we need to be strong to face baseless allegations and conspiracies. I am sure Mr @DKShivakumar is strong enough to face this vindictive agenda against him.

Mr Kumaraswamy used to head the Congress-Janata Dal Secular coalition government in Karnataka before a spate of lawmaker resignations caused its collapse in July. Mr Shivakumar has always been a strong advocate of opposition unity against the BJP government at the centre.

The former Chief Minister, however, said that Mr Shivakumar has the strength to withstand whatever the BJP government throws at him. "Vindictive politics has become the order of the day. Opposition leaders are easy victims of power misuse. In public life, we need to be strong and face baseless allegations and conspiracies. I'm sure DK Shivakumar is strong enough to face this vindictive agenda against him," he tweeted.