Janata Dal (Secular)'s AH Vishwanath and former Chief Minister Siddaramaiah have accused each other of not adhering to the "coalition dharma" on key issues. 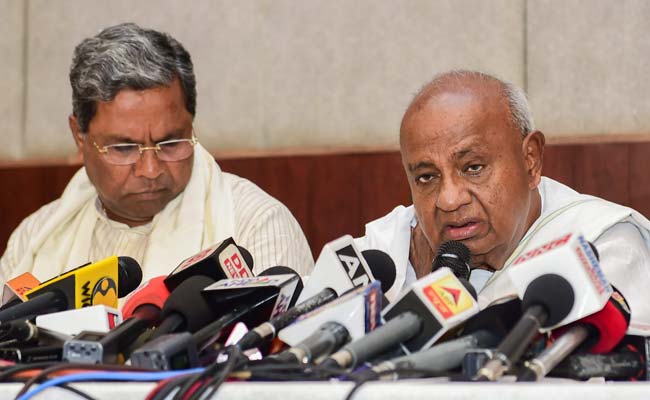 There are growing calls within Karnataka Congress for Siddaramaiah to be appointed as the Chief Minister.

Cracks within the ruling coalition partners in Karnataka seem to be widening, with Janata Dal (Secular) state president AH Vishwanath and former Karnataka Chief Minister Siddaramaiah accusing each other of not adhering to the "coalition dharma" on key issues.

The flare-up between the two leaders followed growing calls within the state Congress for Siddaramaiah to be appointed as the Chief Minister of the state. An irked Vishwanath responded by asking Congress leaders to not resort to "chamchagiri (sycophancy)", and questioning Siddaramaiah's ability as an administrator.

A displeased Siddaramaiah tweeted that he would raise the matter before the coordination committee. "Earlier it was state Higher Education Minister GT Deve Gowda making such comments, and now it's Vishwanath. Who is going to be next? It'll help if seniors in the Janata Dal (Secular) take note of this," he said, adding that "coalition dharma" was the only thing holding him back.

He said that although the Congress leader had been the chairman of the coordination committee for a year, it was yet to come out with a common minimum programme. "Siddaramaiah may want to become the Chief Minister again, but it won't happen before 2022," he added.

Deputy Chief Minister Dr G Parameshwara, who belongs to the Congress, said it was "inappropriate" of Vishwanath to speak against the coordination committee at a time when both the parties need to stand together.

The opposition BJP, meanwhile, claimed that Vishwanath's remarks were only a reflection of the general feeling in the Janata Dal (Secular). "It is not a statement by AH Vishwanath but something that Chief Minister HD Kumaraswamy wants to convey through him," BJP state chief BS Yeddyurappa said.

Even during the Lok Sabha elections, leaders of the two parties had bickered in several key constituencies such as Tumakuru, Hassan and Mandya.