Karnataka Floor Test: The application by Karnataka Congress chief Dinesh Gundu Rao seeks clarification on the order that says the 15 rebel legislators cannot be compelled to participate in the ongoing Assembly proceedings. 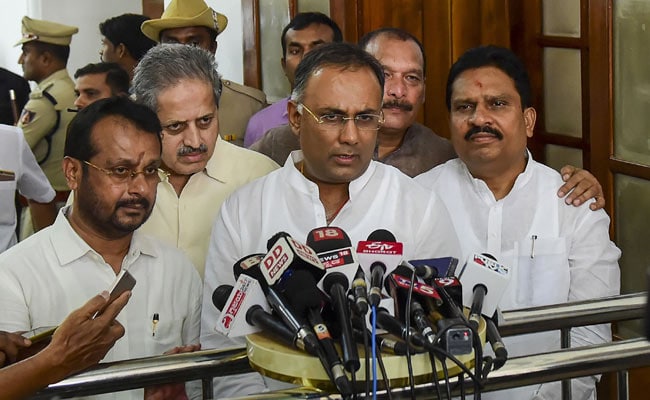 The Karnataka Congress has approached the Supreme Court today contending that its Wednesday's order on the resignation of 15 rebel lawmakers of the Congress and the Janata Dal (Secular) was coming in the way of the party issuing a whip to its legislators for the trust vote in the state assembly.

The application by Karnataka Congress chief Dinesh Gundu Rao seeks clarification on the order that says the 15 rebel legislators cannot be compelled to participate in the ongoing Assembly proceedings, saying that the direction compromises with the party's right to issue whip.

The application says the top court order "whittles down" the power of a political party to issue whip to its legislators as it has a constitutional right to do so and the court can't restrict that.

Further, in the plea, it is stated that the order was passed without involving the Congress legislature party, which presently has 79 legislators in the Karnataka Assembly.

"It is respectfully submitted that as a result of the order dated July 17, the constitutional rights of the applicant under the Tenth Schedule are vitally affected and as such the instant Application is being moved," it said.

The state Congress further submitted that under the Tenth Schedule of the Constitution, a political party has a right to issue a whip to its legislators.

"The exercise of this right under the Constitution is not circumscribed by any condition nor can it be subject to any restrictive orders from the Court even prior to the issuance of the whip. More importantly, any enquiry for the purposes of the Tenth Schedule is a proceeding of the Legislature of the State within the meaning of Article 212 of the Constitution," it said.

The Congress, while referring to a judgement delivered by a constitution bench of the Supreme Court, submitted that any interpretation of the order of July 17 "which whittles down the power of a political party to issue a whip to its legislators would be in the teeth of the provisions of the Tenth Schedule of the Constitution".

It sought a clarification that the direction passed on July 17 does not refer to the rights of a political party to proceed under the Tenth Schedule.

The Karnataka Congress also said since it was not a party in the pending pleas of rebel legislators in which July 17 order was passed, it should be impleaded as a party in the matter.

On July 17, the Supreme Court had said that the 15 rebel Congress-JD(S) legislators in Karnataka "ought not" to be compelled to participate in the proceedings of the ongoing session of the state Assembly and an option should be given to them as to whether they wanted to take part or stay out of it.

A bench headed by Chief Justice Ranjan Gogoi had said that Karnataka Assembly Speaker KR Ramesh Kumar will decide on the resignation of the 15 legislators within such time-frame as considered appropriate by him.

The bench, also comprising justices Deepak Gupta and Aniruddha Bose, had said the speaker's discretion in deciding on the legislators' resignations should not be fettered by the court's directions or observations and he should be left free to decide the issue.

The top court also said the speaker's decision be placed before it.

"We also make it clear that until further orders, the 15 members of the Assembly ought not to be compelled to participate in the proceedings of the ongoing session of the House and an option should be given to them that they can take part in the proceedings or opt to remain out of the same. We order accordingly," the bench had said in its three-page order.