Over 60 locations related to the minister in Karnataka and Delhi were searched in the span of four days.

Bengaluru: More than Rs 300 crore in "undisclosed income" has been found in raids on Karnataka minister DK Shivakumar and his family and associates, sources in the income tax department told NDTV on Saturday as they countered charges that the action against the leader of the Congress party, which sits in the opposition at the Centre, was politically motivated. About Rs 100 crore of this was found from Mr Shivakumar, or DKS as he is known, and his family, they said. The tax department, however, is yet to issue an official statement.

The tax raid on Mr Shivakumar's home that began on Wednesday and continued till early this morning has ended, officials said. Over 60 locations related to the minister in Karnataka and Delhi were searched in the span of four days.

Mr Shivakumar was picked up from a luxury resort in Bengaluru where he was staying with 43 lawmakers flown in from Gujarat by the Congress to check a rash of defections ahead of Rajya Sabha Election. From that day onwards he had been questioned - according to his brother till well after midnight.

"I'm not the kind of person that violates the law and the Constitution... the truth will come out," Mr Shivkumar told reporters after emerging from his home at a posh locality in Bengaluru. 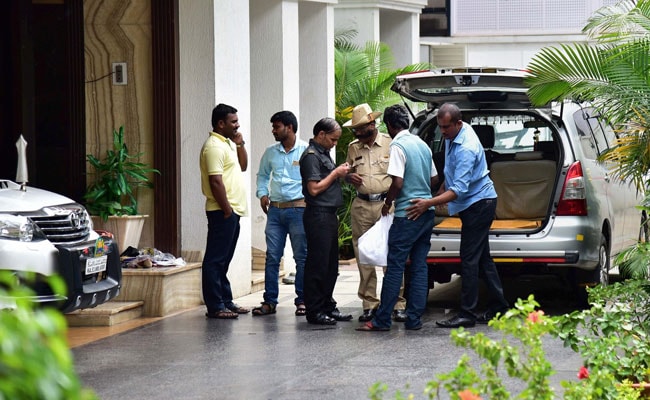 Over 60 locations related to the minister in Karnataka and Delhi were searched in the span of four days.

The tax officials conducted searches at his in-laws' place on Saturday.

Taxmen claimed to have seized over Rs 15 crore in cash and jewellery from more than 60 locations linked to Mr Shivakumar.

Promoted
Listen to the latest songs, only on JioSaavn.com
On Friday, D K Suresh, Mr Shivakumar's brother and MP from Bengaluru Rural had said that not all of the cash reportedly seized was from his family.

The state's ruling party the Congress, which hasn't commented on the huge amount of cash that officials say has been recovered, accused the Centre of "misusing" Central agencies, questioning the timing of raids on Mr Shivakumar in a tax evasion case. They said there was no need to have used the central police forces in the raids. "This is a politically motivated raid," said Karnataka's Chief Minister, Siddaramaiah. The tax officials have denied charges and said the timing had nothing to do with the presence of the MLAs from Gujarat.