'Fishermen Are The Best Rescuers, To Be Recruited Into Police As Coastal Wardens': Kerala

The 'coastal warriors' had come in their boats from several parts of the state and had rescued around 65,000 marooned flood victims. 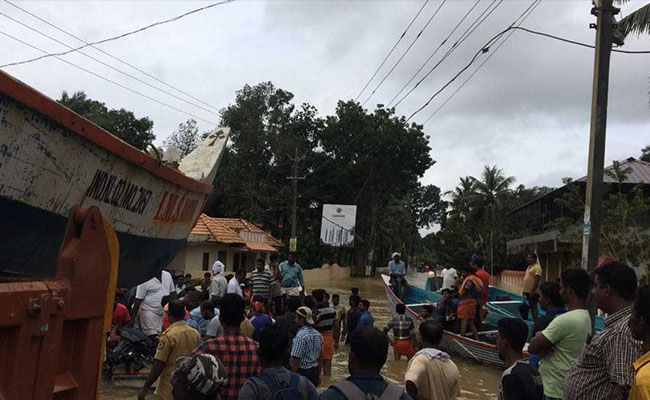 The floods in the state claimed 470 lives since May 29 when the South West Monsoon set in over Kerala.

Kerala finance minister announced that the state will recruit 200 fishermen into police as coastal wardens. After praising them as 'the best rescuers', state finance minister Dr Thomas Isaac also said the Fisheries Department will raise a team of rescue volunteers in every district from fishermen. The state's fishermen, who are now called as "The state's special naval force" and "The coastal warriors" after their exemplary response in the rescue efforts in the recent floods, rescued thousands of people who were trapped in various part of the state.

The 'coastal warriors' had come in their boats from several parts of the state -- after spending money from their own pockets -- and had rescued around 65,000 marooned flood victims.

The floods in the state claimed 470 lives since May 29 when the South West Monsoon set in over Kerala.

Dr Isaac said in a tweet that both schemes have been approved by the concerned authorities.

Learning from lessons of the flood: Fishermen are the best rescuers.Their potential should be tapped. 200 fishermen to be recruited into police as coastal wardens.Fisheries Dept. to raise a team of rescue volunteers in every district from fishermen.Both schemes approved.

Kerala Chief Minister Pinarayi Vijayan on last Wednesday, honoured the fishermen and handed over certificates of appreciation for their efforts at a function in the state capital.

He said the fishermen did not think of their safety, their families or any monetary gains from the government as they joined rescue operations - he thanked all of them.

"We need to protect this unity and go forward. Our state is very dear to us. I am giving Kerala's big salute to the fishermen", Mr Vijayan said.

He said there is a need to ensure proper rehabilitation of the affected like building houses for those who had lost their homes. Also, schools, panchayat offices, police stations and many government offices were damaged in the floods, he said.

Congress President Rahul Gandhi had also lauded the role played by the fishermen who had saved many lives in the recent floods that had ravaged the state.