Was Brought Up By Sikh Parents To Be Strong: Nikki Haley 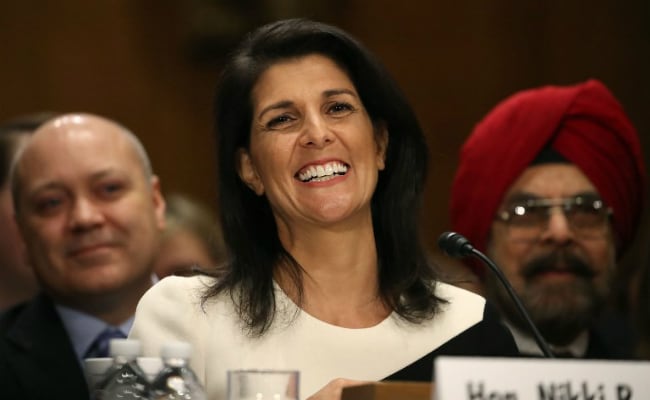 Nikki Haley is the first-ever Indian-American to be appointed to a cabinet-level post.

United Nations: Nikki Haley, the tough-talking and blunt US Ambassador to the UN, has said she was raised by her Sikh parents to be "strong".

Ms Haley, 45, brought up her Indian heritage while addressing a press conference after assuming the role of President of the Security Council for the month of April.

Asked about her qualities of being able to speak freely and openly, Haley said, "Every position that I have ever had, people have assumed that I'm looking towards something bigger when in reality I'm the daughter of Indian parents who said to me 'whatever you do be great at it and make sure people remember you for it'. That is all I am trying to do," Ms Haley said.

Ms Haley was born Nimrata Randhawa to Ajit Singh Randhawa and mother Raj Kaur Randhawa, who had emigrated from Punjab to Canada and then to the US in the 1960s.

Her father had been a professor at the Punjab Agricultural University, and her mother had received her law degree from the University of Delhi.

Ms Haley, earlier this year, scripted history by becoming the first-ever Indian-American to be appointed to a cabinet-level post in any US administration.

Taliking about her joining the administration, Ms Haley said the original call she received to go to Trump Tower following Trump's election win last November was to discuss the position of Secretary of State but she was not offered the post.

Promoted
Listen to the latest songs, only on JioSaavn.com
Ms Haley, know for her tough-talking, has described Syrian President Bashar al-Assad as a "war criminal" and called the UN Human Rights Council "corrupt".