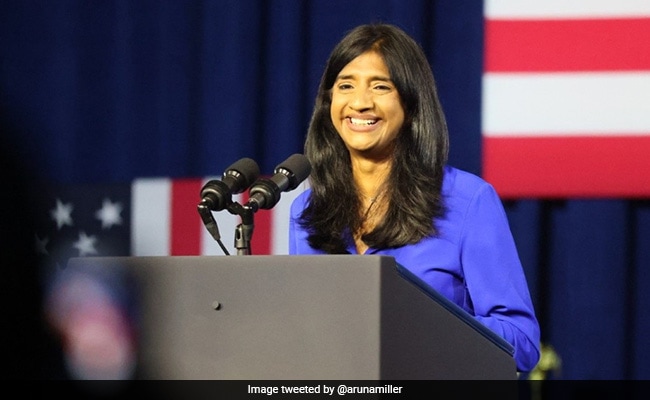 US President Biden and Vice President Harris had campaigned in favour of Aruna Miller.

Aruna Miller on Tuesday scripted history by becoming the first Indian-American politician to win the race of Lieutenant Governor in the state of Maryland, adjoining the US capital.

Miller, 58, a former delegate to the Maryland House, was on the Lieutenant Governor ticket along with Wes Moore -- the Democratic Governor elect.

Soon after the polling closed on Tuesday evening, Moore and Miller were declared elected against their Republican challengers.

Both President Joe Biden and Vice President Kamala Harris had campaigned in favour of Moore and Miller.

In winning the Lieutenant Governor race in Maryland, Miller overcame a last-minute stiff opposition from her distracters who accused her of courting Hindu nationalists, a charge she denied.

In fact, her popularity among Indian-Americans in Maryland is bipartisan. Some of the top Trump and Republican supporters came out in support of her and raised funds. Prominent among them include Jasdip Singh Jassee.

“Maryland, tonight you showed the nation what a small but mighty state can do when democracy is on the ballot. You chose unity over division, expanding rights over restricting rights, and hope over fear. You chose Wes Moore and me to be your next Governor and Lieutenant Governor,” Miller said in her victory speech.

Miller was born in Andhra Pradesh before migrating to the US along with her parents.

“Ever since I came to this country in 1972, I've never stopped being excited for the promise of America. I will never stop fighting to make sure that promise is available to everyone. And this promise begins with a commitment to deliver a Maryland where we leave no one behind,” she said.