Tamil-Americans Join Ongoing Protest Against Jallikattu Ban In US 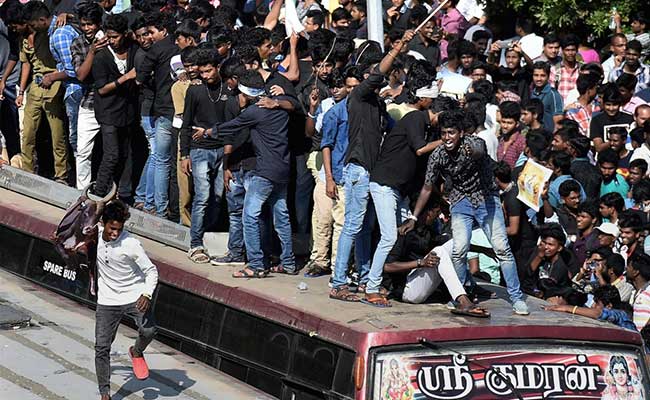 Washington: Several hundred Tamil-Americans held a rally at the Gandhi statue in support of the ongoing Jallikattu movement demanding lifting of the ban on bull-taming sport which is an integral part of Tamilian culture.

Several dozens of them also held a protest outside the PETA headquarters in Norfolk, Virginia. Holding posters and banners, Tamil-Americans including a large number of children and women raised slogans in support of Jallikattu and vented out their anger against animal rights group People for the Ethical Treatment of Animals (PETA), which is leading in supporting the ban on the grounds that it is a torture to animal.

"We love our animals. We know how to treat our animal. This is part of our tradition and culture," said Babu Vinayagam, one of the anti-PETA protestors at the Gandhi statue in front of the Indian Embassy in Washington.

"Today's rally is to show our solidarity with our people back home fighting against ban on Jallikattu," he said.

Majority of the slogans were in Tamil, but at times they shouted "Down Down PETA," venting their anger at the animal rights group.

They also shouted "We want Jallikattu." Vinod Kumar, an IT professional from Tamil Nadu, said adding that non-resident Tamilians want a permanent solution and an ordinance route to lift the ban on Jallikattu.

"We want legislative measures, so that this age-old tradition could be continued," he said.

This was one of the largest protest rally and demonstration in front of the Indian Embassy in recent years.

"We may be away from home, but home is always with us. We are Tamil people and we are proud of our heritage, it is our pride that is being taken away from us," said Nalini Britto speaking on behalf of the Greater Washington Tamil Diaspora, which had organised the anti-PETA, pro-Jallikattu rally in Washington.

"Dozens of people travelled to Hampton Roads from all across the world to protest outside of the PETA headquarters," the news channel said.

"Protesters stood outside of PETA headquarters in Norfolk, telling 13 News Now they are protesting the organisations influence on the court decisions," it said.

"What PETA has done is that there is a prevention of cruelty act in India, which was backdoor amended, through the lobbying that PETA did," Karthik Rangarajan, a protest organiser said.

Promoted
Listen to the latest songs, only on JioSaavn.com
In a statement, PETA alleged that these protesters "are anxious" to overturn the court ruling and "preserve a culture as heinous" as fox hunting was in the UK and bullfighting is in Spain, one now outlawed the other being banned, city by city.