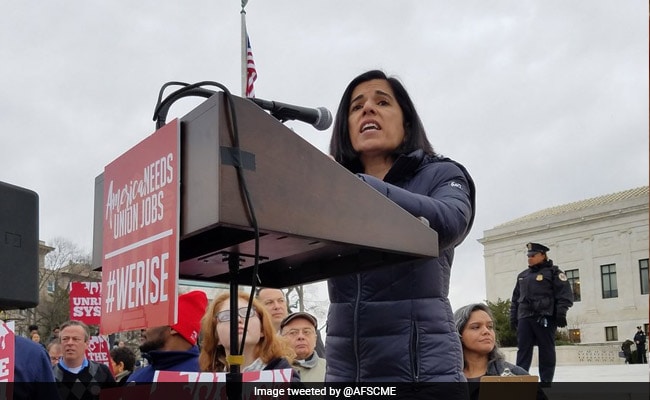 Ms Nanda pointed out to attacks on free press and also on sitting members of Congress.

Indian-American Seema Nanda, the newly-appointed CEO of the opposition Democratic Party's decision-making body, has claimed that the US democracy is under attack and some of its sacred institutions are being challenged every day under the Trump administration.

Ms Nanda was last month appointed as the Chief Executive Officer (CEO) of the Democratic National Committee (DNC), the formal governing body of the Democratic Party, making her the first from the Indian-American community to lead operations of a major political party in the US.

She described the last 18 months of the Trump administration as an incredibly difficult time for the US.

"It is an incredibly difficult time in this country. Our democracy is under attack every day by this administration that is really challenging some of our most basic and sacred institutions that we've had," Ms Nanda told PTI.

"We see attacks every day on the free press, vicious attacks on sitting members of Congress by this administration. We see corruption. What is most frustrating about it is it takes away from the real issues that the Democratic Party wants to talk about," she said, adding that income inequality is greater than it has ever been.

Beginning July 23, Ms Nanda would be responsible for the day-to-day operation of the powerful DNC.

In her capacity as the DNC CEO, she would play a key role in party's winning strategy in the mid-term November elections, for which the DNC has set a target of winning back the House of Representatives from the Republicans.

"We are very focused on protecting our democracy, making sure we have the institutions that provide the checks and balances to the government that have made this country so great and open to all and welcome to all," Ms Nanda said.

Currently executive vice president and COO at the Leadership Conference on Civil and Human rights, largest human and civil rights organisation in the US, Ms Nanda's appointment is seen as another sign of the political emergence of women in US' political arena.

A lot of the really strong advocacy organisations right now are led by Indian-Americans, she said, adding that there are more Indian-American members in Congress than ever.

The DNC under its Chair Tom Perez is focused on winning the November polls, she said, adding that this is not about gaining control of the House and the Senate but also winning other elections at the level of States, counties and cities.

"They're focused on electing Democrats from school board to the president. There has been a lot of really wonderful work happening with organising, making sure that people are engaged on the ground, focusing on technology, digital organising," Ms Nanda said.

Responding to a question on President Donald Trump's allegations that Democratic Party is obstructionist, she said that this is simply not true.

"When one party controls all three branches of government and that party is not willing to really hold the executive branch accountable, you have a real crisis. So the volume is really high for the concern about where the country is right now. And the Democratic Party is the party that has those solutions needed in the values of this country," Ms Nanda said.

Referring to the fact that more than a dozen Indian-Americans are running for Congress this year, she said an overwhelming majority of them are from the Democratic Party.

On the current administration's immigration policies, Ms Nanda said that this president has had the most disturbing policies that one has seen in recent American history.

The Democratic Party is extremely focused on family reunification, she said, adding that on broader immigration issues, the country desperately needs immigration reforms.

"One thing that is extremely troubling that this administration is doing is just within the last few days they are starting to go back and look at naturalised citizens and seeing if there is some issue as to whether they actually shouldn't be citizens at all. They've opened up a new office to do this, which is a deeply troubling. There are so many attacks on immigrant populations from the Muslim ban to immigrants at the border," Ms Nanda said.