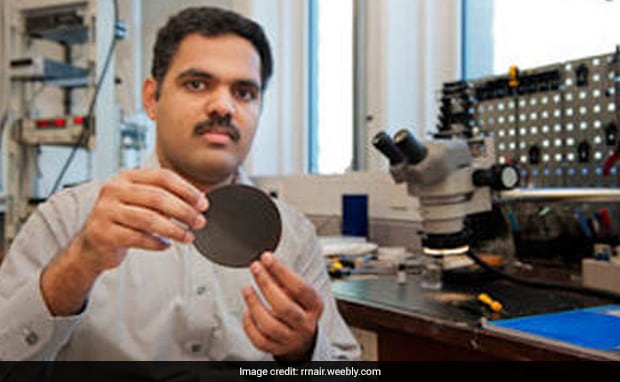 "The health benefits of this could be huge for those who need it most," Scientist Rahul Nair said.

An Indian-origin scientist based in the UK is working on the challenge of water scarcity by experimenting with graphene to make saltwater drinkable through innovative filtering techniques.

Rahul Nair, a Professor of Materials Physics at the National Graphene Institute (NGI) at the University of Manchester, has demonstrated the real-world potential of using a graphene-oxide membrane as a sieve to filter salt from water cleanly and cheaply. First published in the journal 'Nature Nanotechnology', his work highlights graphene's huge potential to support innovation in India's fast developing economy.

"The health benefits of this could be huge for those who need it most. It has been reported that around 100 million people across India are on the front lines of a nationwide water crisis. As the effects of climate change continue to reduce modern city's water supplies, governments around the globe are investing in desalination technologies," he said.

Graphene is viewed as a disruptive technology, which could open up new markets and even replace existing technologies or materials. According to experts, it is when graphene is used both to improve an existing material and in a transformational capacity that its true potential can be realised.

First isolated at the University of Manchester in 2004 by Sir Andre Geim and Sir Kostya Novoselov, graphene is the world's first two-dimensional (2D) material and has the potential to make a significant impact in a range of industries from transport, agriculture, construction and healthcare.

India is the world's fourth-largest producer of graphite, the bulk material which in a two-dimensional format creates graphene.

Most recently, Lifesaver, a UK-based manufacturer of portable and reusable water filtration systems, is working in partnership with Nair''s team as they focus on developing graphene technology that can be used for enhanced water filtration.

The goal is to create a cutting-edge product capable of eliminating an even wider range of hazardous contaminants such as bacteria, viruses, certain chemicals and potentially radioactive materials that can''t currently be removed by its existing high performance filtration process.

Mr Nair said: "The University of Manchester is the world-leading centre for graphene membrane development and LifeSaver has the expertise in making a portable water filter."

"This is a great example of a collaborative project where we are trying to combine two independently developed technologies into one, to enhance the quality and availability of drinking water for those who need it most," he said.

The University of Manchester said its world-class status as the birthplace of graphene and centre of its international commercialisation has been reinforced by more than GBP 120-million investment to establish the NGI and the Graphene Engineering Innovation Centre (GEIC). University alumnus and GEIC Application Specialist, Dr Arun Prakash Aranga Raju, is working with industry to formulate new ideas to improve their product using graphene.

"With their critical mass in graphene research and centres of excellence, Manchester could help Indian industries gain confidence in exploring the use of graphene and 2D materials for their products via rapid development, de-risking and validation of the prototypes," said Dr Arun Prakash Aranga Raju, originally from Coimbatore.

"The University [of Manchester] offered me exactly what I was looking for: renowned professors, world-class research facilities and high graduate employability too," he said.

The University of Manchester said it has a history of creating strong links with business, public authorities and students in India.