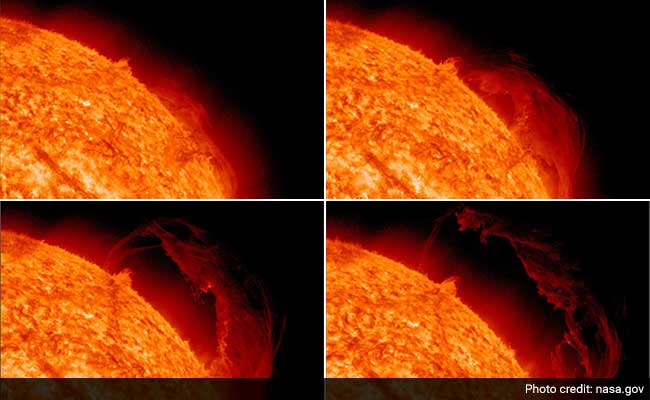 This series of images show the progression of and eruptive prominence that lifted off from the Sun on September 15, 2010. Credits: NASA/SDO/AIA

London: An Indian-origin scientist has built a novel tool that can predict large solar storms more than 24 hours in advance and save systems on the Earth from the coronal mass ejections (CMEs).

Developed by Neel Savani, visiting researcher at Imperial College London and space scientist at NASA, the new measurement and modelling tool takes a closer look at where mass ejections originate from on the Sun and makes use of a range of observatories to track and model the evolution of the cloud.

Currently, satellites can only tell with any certainty the orientation of a mass ejection's magnetic field when it is relatively close to the Earth, giving just 30-60 minutes' notice.

These mass ejections can cause problems with GPS technology - used by all kinds of vehicles, from cars to aircraft systems.

"As we become more entwined with technology, disruption from large space weather events affects our daily lives more and more. Breaking through that 24-hour barrier to prediction is crucial for dealing efficiently with any potential problems before they arise," Dr Savani explained.

Coronal mass ejections (CMEs) are eruptions of gas and magnetised material from the Sun that have the potential to wreak havoc on satellites and Earth-bound technologies, disrupting radio transmissions and causing transformer blowouts and blackouts.

Dr Savani and colleagues have tested the model on eight previous mass ejections, with the results showing great promise at improving the current forecasting system for large Earth-directed Solar storms.

Previously, forecasts relied on measuring the initial CME eruption but were not efficient modelling what happened between this and the cloud's arrival at the Earth.

If further testing at NASA supports these initial results, the system could soon be used by the National Oceanic and Atmospheric Administration (NOAA) in the US and the Meteorological Office in the UK for geomagnetic storm predictions.

The paper appeared in the journal Space Weather.