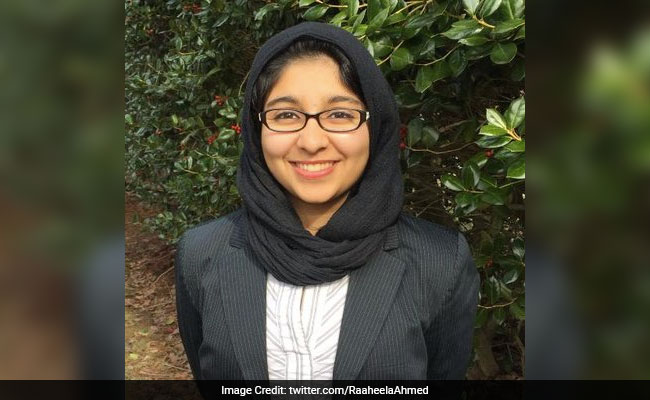 Raaheela Ahmed, 23, won a key election in US' Prince George's county of Maryland

Washington: A Muslim-American woman, whose parents are from India and Pakistan, has won a key local election in the US state of Maryland which was dominated by anti-immigrant and anti-Muslim rhetoric.

Raaheela Ahmed, 23, won the school board race in Prince George's county of Maryland by defeating a long-time system administrator by an impressive 15 per cent vote difference.

She had unsuccessfully run for this position four years ago in 2012. Her father is from India and mother from Pakistan. Her victory gains significance as her district has 80 per cent of African-American population.

She was endorsed by the former Republican National Committee Chairman Michael Steel.

"It's interesting that on the same day Donald Trump was elected as president of the US, I as a hijabi Muslim young woman was also elected to serve in a public office. I think that speaks volumes about the diversity of American opinion, and that American dream is still well and alive," Ms Ahmed said.

Promoted
Listen to the latest songs, only on JioSaavn.com
"I'd like to act as a form of inspiration for other minorities that they can achieve what they will, given prayer, circumstance and hard work. This win would not have been possible without the support and belief that other people had in me," she said.

"For my young minority women, please know that at the end of the day, you are worthy of your highest inspirations. You have to believe that you are able to achieve them, even if societal structures do not yet allow for that. Because one day, those glass ceilings WILL break. And who knows?" Ms Ahmed said.

As Sanjeev Gupta Rose From Trader to Tycoon, Several Banks Backed Away