Ramkumar Sarangapani, a Dubai resident, now holds the most number of world records by an individual in the UAE and India, the Gulf News reported. 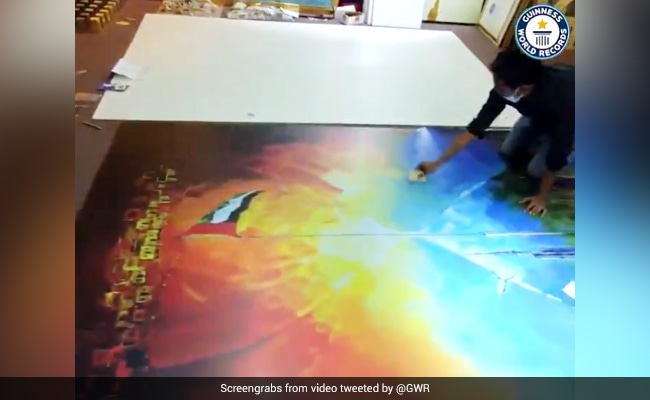 Ramkumar Sarangapani's card has dimensions of 4 metres in length and 2.05 metres in width

An Indian expatriate in the UAE has entered the Guinness World Records for the 19th time, after he unveiled a 8.2 square metre giant pop-up greeting card, commemorating the 15th Accession Day of His Highness Sheikh Mohammed Bin Rashid Al Maktoum, Vice-President and Prime Minister of the UAE and Ruler of Dubai, according to a media report on Saturday.

Ramkumar Sarangapani, a Dubai resident, now holds the most number of world records by an individual in the UAE and India, the Gulf News reported.

Mr Sarangapani's pop up greetings card is 100 times larger than the regular pop-up cards. Inside, it has a collage of Sheikh Mohammed's paintings created by Dubai-based artist Akbar Saheb, the newspaper said.

While the pop-up card dedicated to Sheikh Mohammed has a closed surface area of 8.20 square metres, the previous record, which was set in Hong Kong, was of 6.729 square metres.

Mr Sarangapani's card has dimensions of 4 metres in length and 2.05 metres in width. The card's outer cover is the winning bid of Expo 2020, the daily reported.

Speaking to Gulf News, Mr Sarangapani said, "I had been working on this for the last six months and was waiting for the most opportune time to break this record to make it very special for the nation. And there couldn't have been a more auspicious occasion than the 15th Accession Day of Sheikh Mohammed while I also dedicate this to the 50th anniversary year of the UAE's formation."

The card will be exhibited at Doha centre here from January 4 to 18, as part of the UAE's National Day celebrations. COVID-19 precautionary measures will be in place at the exhibition centre, officials said.

Mr Sarangapani, who shifted from Chennai to Dubai 17 years ago, specially thanked artist Saheb for his contributions to the pop-up greeting card.