Western countries such as the US and the UK have seen some of the highest death rates from COVID-19 in the world, which are likely to correlate with unhealthy lifestyles. 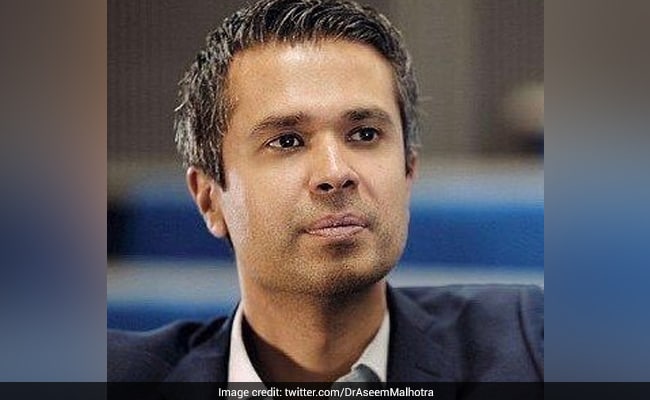 Poor diet is a major cause behind the COVID-19 deaths and the Indians must urgently cut down on ultra-processed food to build resilience against the deadly virus, a leading Indian-origin cardiologist in the UK has cautioned.

Dr Aseem Malhotra, who is among the UK's National Health Service (NHS) frontline medics and also a professor of evidence based medicine, said that obesity and excess weight were the "elephant in the room" that need to be addressed as a major factor behind the deaths from the coronavirus.

"India is particularly vulnerable, having a very high prevalence of lifestyle related diseases," says the 42-year-old medic, who is on a mission to spread awareness around lifestyle changes as a major weapon in the fight against coronavirus.

"Specifically, conditions such as Type 2 diabetes, high blood pressure, heart disease are three of the major risk factors for death from COVID-19. This is rooted in excess body fat, a cluster of conditions known as a metabolic syndrome," he noted.

Western countries such as the US and the UK have seen some of the highest death rates from COVID-19 in the world, which are likely to correlate with unhealthy lifestyles.

"The elephant in the room is that the baseline general health in many Western populations was already in a horrendous state to begin with. In the UK and US, more than 60 per cent of adults are overweight or obese," he pointed out.

In the US, less than one in eight people are metabolically healthy, which means having normal blood pressure, having a weight circumference if you are a man less than a 102cm and less than 88cm for a woman and healthy levels of blood sugar and good cholesterol.

"There's no such thing as a healthy weight, only a healthy person. If people try to maintain all these metabolic health parameters through a healthy lifestyle, this could potentially be achieved within a few weeks of just a change of diet," says Malhotra, who is from New Delhi.

Malhotra warns that the medications that are used for Type 2 diabetes and many of the other conditions have "very, very marginal effects" in terms of improving lifespan or reducing risk of death, which most people are not made aware of, and they also come with side effects.

"This is not to say that medications should be discontinued but the lifestyle changes are considerably more impactful on health and will reduce the need for medication. The positive news is that you can reverse this, but it is not being made aware to patients or practised by the majority of physicians as lifestyle prescriptions in India," he said.

Based on his own clinical experience and also reflected across medical literature, the expert recommends giving up ultra-processed foods, which covers any packaged food that comes with five or more ingredients, because usually these are high in sugar, starch, unhealthy oils, additives and preservatives.

In the UK, these foods now represent more than 50 per cent of the diet, which he says is "really quite staggering and shocking".

Similar figures are there for the US and probably to some degree reflect why there is specifically more increased death rates from COVID-19 in these countries.

"So, what I would advise the Indian population is to completely cut out these types of food from their diet, make sure that you are cooking from scratch, do not snack," the doctor said.

"Beyond that, the other issue in Indian diet is that we have a very high intake of refined carbohydrate foods, these are also foods that are particularly harmful in excess because they raise glucose and insulin and therefore rooted in many of these chronic conditions such as Type 2 diabetes, high blood pressure and heart disease - this involves too much consumption of flour and white rice.

"These must be swapped with a variety of wholefoods such as vegetables and fruits and for those who are non-vegetarians, it is completely fine to eat red meat as well as full fat dairy products, eggs, fish etc," he said.

In reference to recent data on the higher risk faced by black, Asian and minority ethnic (BAME) communities in the UK from coronavirus, the NHS doctor believes that disparity is also cultural or lifestyle related.

"South Asians have been found vulnerable because the prevalence of metabolic syndrome is three-four-fold higher in the population. Indians, therefore, I think have to be extra careful with their diet and what they are consuming and they should also not have the illusion of protection just because they are given a normal body mass index (BMI). Extra body fat, particularly around the waist, is much more detrimental to health than using outdated indices such as BMI to define health risk," he said.