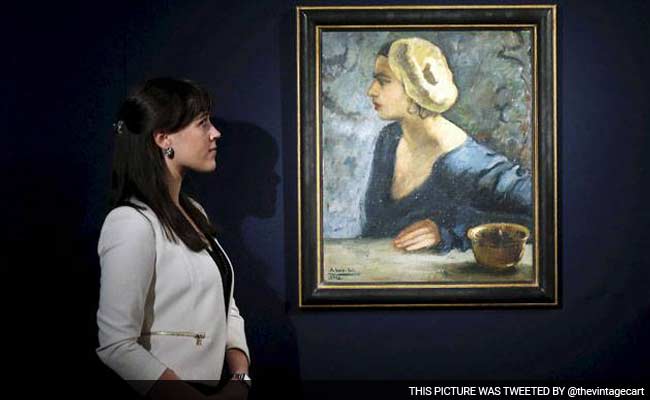 New Delhi: A rare self portrait of modernist painter Amrita Sher-Gil created in 1931 sold for 1.7 million pounds in London at an auction by international auction house Sotheby's, which posted sales of over 4.9 million pounds.

Ms Sher-Gil is considered among the most important Indian painters of the 20th century. With 95 of the 174 documented works created over the course of her brief career (Ms Sher-Gil died in 1941 aged 28) held in the collection of the National Gallery of Modern Art few works ever appear at auction.

Like her Mexican peer Frida Kahlo, with whom she shares Hungarian heritage, Sher-Gil was a rebellious and adventurous spirit who broke barriers in art and life.

Yamini Mehta, International Head of Modern Contemporary South Asian Art at Sotheby's said, "...As a National Treasure in India, it is rare for any work by the artist to appear at auction....This is one of her most romantic works as it was presented to her fellow artist and lover, Boris Taslitzky and has been in the hands of his family until now."

"Off Lamington Road" by the Mumbai-born Gieve Patel, a poet and a playwright as well as a painter and practicing physician, sold for 149,000 pounds, well in excess of the press sale estimate of 30,000 pounds to 50,000 pounds.

A new benchmark was also set for contemporary artist Nasreen Mohamedi, when his untitled work sold for 93,750 pounds, around five-times higher than was estimated to sell.

A 1964 work by M F Husain titled "The Sixth Seal" that builds on the themes of his celebrated opus "Zameen" and depicts vignettes of ancient Indian sculpture, miniature painting, dance and folk art fetched 725,000 pounds.

"The sale had the right alchemy of fresh to market works at attractive estimates. We are thrilled to see such strong prices for masters Ms Sher-Gil, Mr Husain, Mr Sabavala and Mr Chowdhury with robust competition for the works from both established and new collectors," Ms Mehta said.

Earlier, a collection of miniature Indian paintings from the Sven Gahlin Collection a total of 4.6 million pounds.

Both the Modern and Contemporary South Asian Art sale and The Sven Gahlin Collection featured as part of Sotheby's Indian Art Week in London.