2 Indian-Americans To Be Honoured With Great Immigrants Award

Shantanu Narayen and Vivek Murthy will be honoured with the prestigious 'Great Immigrants' annual award on US's Independence Day on July 4. 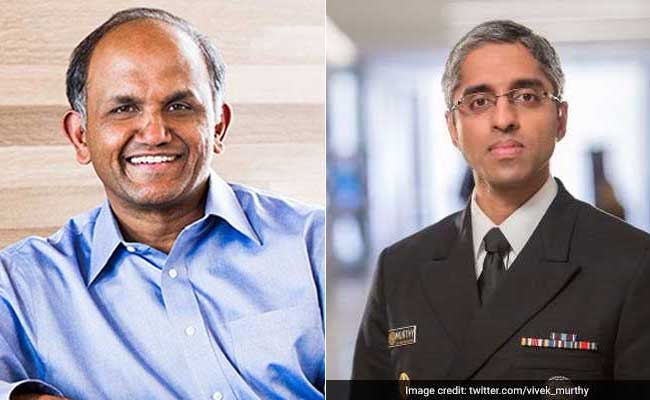 New York: Indian-Americans, Adobe chief Shantanu Narayen and former US Surgeon General Vivek Murthy, are among 38 immigrants to be honoured this year for their role in helping advance the country's society, culture and economy.

Shantanu Narayen and Vivek Murthy will be honoured with the prestigious 'Great Immigrants' annual award on US's Independence Day on July 4.

39-year-old Vivek Murthy was born in the UK and is a Harvard and Yale alumnus, he was appointed by former President Barack Obama in 2014, becoming the first-ever Indian-American to occupy the post and also the youngest ever surgeon general of the country.

However, Mr Murthy was dismissed this year in April by the Trump administration.

55-year-old Shantanu Narayen a native of Hyderabad has an undergraduate degree in electronics engineering, a master's degree in computer science, and an MBA from UC Berkeley. He is a board member of Pfizer and US-India Business Council (USIBC). He was among a select group of CEOs who met Prime Minister Narendra Modi in Washington for a roundtable during the leader's visit for first bilateral meeting with President Donald Trump this week.

Among other honorees include Canadian-origin social entrepreneur Jeff Skoll, who has been awarded the 2017 Carnegie Medal of Philanthropy, PayPal co-founder of Ukrainian origin Max Levchin, Iranian-origin philanthropist and entrepreneur Hushang Ansary.

Each year since 2006, the corporation has recognised the contributions of naturalised citizens, and for 2017, the honorees represent more than 30 different countries of origin, a wide range of personal immigration stories, and a high-level of professional leadership in numerous fields.

"Our annual tribute to 'Great Immigrants' demonstrates the richness of talent, skills, and achievements that immigrants from around the world bring to every sphere of American society," said Vartan Gregorian, president of Carnegie Corporation of New York.

"This campaign reminds us of the debt the United States owes to generations of immigrants who become citizens and contribute to the progress of this country. Today, we celebrate and thank them," he said.

The honorees will be recognised with a full-page public service announcement in The New York Times and an online public awareness initiative.

Promoted
Listen to the latest songs, only on JioSaavn.com
The Carnegie Corporation of New York was established in 1911 by Scottish immigrant Andrew Carnegie to promote the advancement and diffusion of knowledge and understanding.

In keeping with this mandate, the corporation's agenda focuses on the issues that Andrew Carnegie considered of paramount importance: international peace, the advancement of education and knowledge, and a strong democracy.