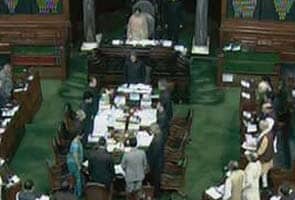 New Delhi: At a time when MPs are not seen to take their legislative business seriously - the last session was an exception - the younger MPs seem to be slowly making their mark and impact in the Lok Sabha.

Cutting across party lines, young members have scored higher on many fronts, especially attendance which was higher for them than the overall average.

Meenakshi Natrajan, the Congress MP from Mandsaur in Madhya Pradesh, has attended Parliament for a whopping 85 per cent of the sittings since June 2009. The average attendance of all members is around 77 per cent.

The 40-year-old promising politician, said to be close to Congress vice president Rahul Gandhi, participated in 16 debates and posed 135 questions against the average of 281, according to figures compiled by the PRS Legislative Research that works on parliamentary research and practices.

Congress MP from Lakshwadeep Hamdullah Sayeed, 31, attended 82 per cent of sittings of Parliament till now. He posed 572 questions and even moved two private member's bills.

All India Majlis-E-Ittehadul Muslimmen member Asaudin Owaisi, 44, asked a whopping 1,042 questions. He attended 69 per cent of sittings and participated in 38 debates.

Nilesh Narayan Rane, 32, the Congress MP from Ratnagiri in Maharashtra, attended 71 per cent sittings, participated in 18 debates and asked 545 questions.

However, Congress scion Rahul Gandhi, 43, seems to have been busy with his party work as his attendance was a mere 43 per cent.

The Amethi MP participated in only one debate and did not move any private member's bill.

His cousin and BJP MP from Pilibhit Feroze Varun Gandhi, 33, attended 65 per cent of the sittings and participated in two debates. He asked 618 questions and moved two private member's bills.

YS Jaganmohan Reddy, the YSR MP from Kadapa in Andhra Pradesh, has one of the lowest attendance records of 31 per cent since he was elected in May 2011. He participated in two debates and did not ask any questions. Jagan, as he is popularly known, has been in jail for over a year in a disproportionate assets case.

The data pertains to the period from June 2009 when these members were elected to the current session.

According to PRS, attendance was computed as the days the member signed the register as a percentage of the days they were eligible to attend the house. The questions - both written and oral - were the ones that were admitted by the chair to be answered.

Debates provide a count of all occasions when the MP spoke in parliament including on bills, during zero hour and made special mentions. Under private member's bills, all bills introduced by the MP were counted.

Ministers could not be accounted for as they do not sign the attendance register. As they represent the government in parliament, they do not ask questions, participate in debates as ordinary members, or introduce private member bills. The speaker and the deputy speaker follow a similar convention.

Thus, there are no records for MPs like Sachin Pilot and Jitin Prasada.

Promoted
Listen to the latest songs, only on JioSaavn.com
The leader of the opposition does not sign the attendance register but does take part in all other activities. The data provided was for all MPs for the period that they did not occupy any of these positions.