'You do Your Work, I Will do Mine': Mulayam Singh Yadav on Rape Cases in Uttar Pradesh 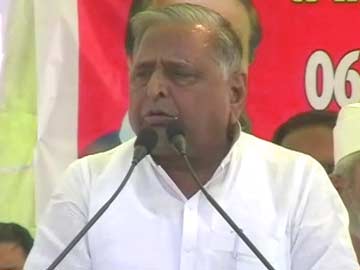 New Delhi: As resentment is growing over brutal attacks on women in Uttar Pradesh, chief minister Akhilesh Yadav and his family have made a series of callous comments. (Girl Allegedly Killed, Hanged From Tree in UP Again)

The young chief minister, who faces intense criticism over the gang-rape and murder of two teen girls in Badaun in his state last week, had yesterday suggested a "Google search" to understand that women are raped elsewhere in the country too. (Google Search Will Show Badaun-Type Incidents in Other Places Too: Akhilesh)

Today, his father and chief of the Samajwadi Party Mulayam Singh Yadav snapped at reporters when they brought up law and order in the state, saying, "You do your work, I will do mine".

And Akhilesh's uncle and senior SP leader Ram Gopal Yadav explained that "vulgarity, obscenity and violence shown on TV channels" was to blame for the multiple incidents of rape and assault in UP. He also said, "In many places, when the relationship between girls and boys come out in open, it is termed as rape."

A few months ago Mulayam Singh had said, "Should rape cases be punished with hanging? They are boys, they make mistakes."

Ram Gopal also echoed his nephew, the chief minister, when he said, "Uttar Pradesh is being deliberately targeted. Such incidents are happening everywhere."

The Opposition has ripped into Mr Yadav. Young parliamentarian Chirag Paswan of the LJP said, "Akhilesh's comments on rape are quite insensitive."

Former union home secretary R K Singh, who has been elected to the Lok Sabha on a BJP ticket, said the situation in Uttar Pradesh is "a fit case" for central intervention. (Also read: Horrified at Reports of Violence Against Women in India: US)

Promoted
Listen to the latest songs, only on JioSaavn.com
"You cannot have a starker example of breakdown of law and order. Such incidents are taking place day after day, night after night", Mr Singh said, referring to several cases of rape and brutal assault on women reported in UP since the two girl were found hanging from a mango tree in Badaun. (Pressure Mounts on UP Government Over Badaun Gang-Rape)

Mr Paswan said, "Whether the Centre intervenes or the state govt. takes responsibility, as a young MP I demand that every citizen get an equal sense of security."