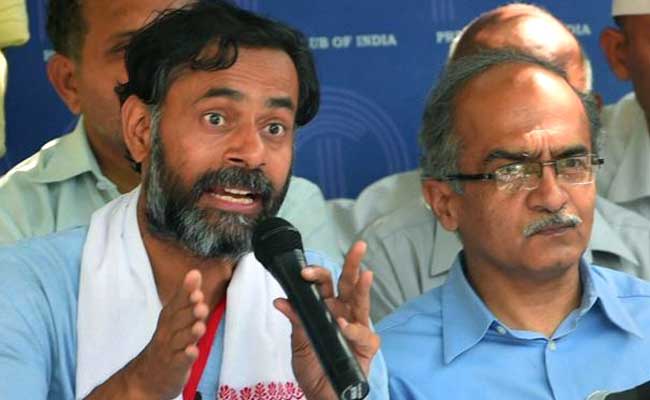 New Delhi: Accusing Delhi Chief Minister Arvind Kejriwal of betraying anti-corruption movement by bringing in a "weak" Lokayukta Bill "which is unlikely to be approved", leaders of Swaraj Abhiyan today announced plans to "re-ignite" the campaign and hoped they will get support from Anna Hazare.

Addressing the two-day 'National Convention on Corruption' in New Delhi, the leaders, who had rebelled against Aam Aadmi Party leader Arvind Kejriwal, also hit out at Prime Minister Narendra Modi for allegedly "patenting ways" to weaken anti-corruption laws and institutions.

They said RTI activists and whistle blowers will join the "apolitical" campaign for which a "Citizens' Whistle Blower Forum" (CWBF) will be formed.

"We had hoped the agitation (launched by activist Anna Hazare) for Lokpal would broaden. After that a political party (AAP) was formed. Arvind Kejriwal became supremo of the party. The party moved out of its first government saying it was not being allowed to bring in Lokayukta.

"And eventually, when it did pass a Lokayukta Bill (during its present tenure), they drafted such a weak bill...they inserted a clause which will ensure it doesn't become law. He (Kejriwal) betrayed the entire movement," Abhiyan leader Prashant Bhushan said.

Hitting out at the AAP Government over the bill, Mr Bhushan said it lacks transparency and noted its clause that Lokayukta will have powers to also investigate corruption matters relating Union Ministers is "unlikely" to be accepted by Centre.

The noted lawyer added it was this "betrayal" that has necessitated efforts to launch the agitation afresh, which he added, will see participation by RTI activists, whistle blowers and those working for a "flawless" Lokpal.

Mr Bhushan targeted the Centre accusing it of trying to destroy RTI by bringing out agencies like CBI out of the Act's ambit and planning amendments to the law.

"And the other way of weakening any law is, which is patented by Modiji, is to not make appointments to see the law is destroyed (by not implementing it)," he said claiming that in Modi's home state Gujarat no Lokayukta was appointed for many years.

Mr Bhushan also observed that public private partnership mode of implementing government projects and privatisation of public sector companies as "new ways" of corruption and stressed on need for chalking out plans to give direction to the agitation.

Echoing Mr Bhushan's views, Abhiyan leader Yogendra Yadav said the anti-corruption agitation appeared to have "extinguished" over the past some years and claimed it will be "re-ignited" through the CWBF, which he added, will be an "apolitical" movement.

"This convention is to prove that agitation is still alive, that those fighting against corruption are not keeping quiet. It is an effort on behalf of the Abhiyan to reignite the agitation.

"The convention is not about a party, but to form a forum of whistle blowers and RTI activists. We hope Anna co-operates with us, blesses us when the movement picks up," he said.